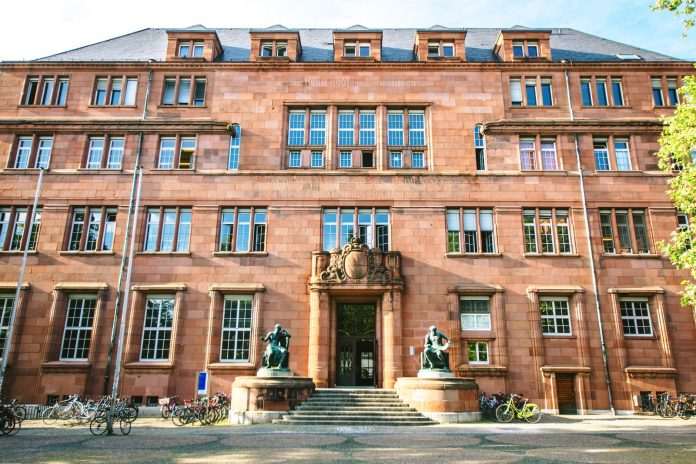 The small silver-gray box in Jan Behrends’ hand seems rather unremarkable: It has a hatch to open, two buttons, and a blue display. Yet this small box is an analytical instrument with astonishing capabilities. It can detect and distinguish between individual molecules with the help of so-called nanopores. In this process, the structure of the analyzed molecules and physicochemical properties are determined.

Jan Behrends is Professor of Physiology at the University of Freiburg. He not only helped develop this small box, which is being realized by a company that he founded; his research group in Freiburg also works on the fundamental aspects of this new technology. Behrends is also the deputy spokesperson of the Future Cluster Initiative “nanodiag BW,” which brings together stakeholders from fundamental science, applied research, and industry and which wants to turn Baden-Württemberg into a future center of nanopore technology.

An independent, high-ranking jury of experts headed by Prof. Dr. Michael Kaschke, President of the Donors’ Association for the Promotion of Sciences and Humanities in Germany, and Prof. Dr. Birgitta Wolff, former President of Goethe University Frankfurt am Main, has now selected the Freiburg project as one of only seven winners in the “Clusters4Future” competition organized by the German Federal Ministry of Education and Research. The selection process consisted of two final rounds with 117 submissions.

Nanopores made out of bacteria
“Nanopore is an umbrella term for all kinds of holes on a molecular scale in an electrically insulating material,” Behrends explains. “This can be a very thin layer of a mineral material or a biological membrane.” Biological nanopores are made of proteins and form, for example, channels through which substance exchange takes place between the cell interior and the external environment. “In our experiments, we use artificial cell membranes that we produce ourselves,” Behrends says. “We then incorporate individual nanopores into them, which we obtain from bacteria.” For example, the scientists use the pore-forming toxin aerolysin, which is produced by bacteria of the genus Aeromonas hydrophila, for this purpose. Alternatively, an electron beam can be used to drill nanoscale pores into thin layers of silicon nitride, for example. “But bacteria can make more precise holes than we can,” Behrends states. That’s why bacterial pores are a specialty of the Freiburg researchers because precise and always identical pore shapes are important to achieve precise measurement results in molecular analysis.

The artificial cell membrane with nanopore “bathes in a conductive medium,” says Behrends, for example in a salt solution to which voltage is applied. Consequently, current flows through the pore. “If a non-conducting substance such as a peptide now enters the pore, for example due to diffusion or because it itself has a charge, then we measure a termination of the current,” Behrends says. In other words, when biomolecules travel through the pore, the electrical conductivity of the pore changes in a characteristic way. The type of change tells us what kind of molecule it is and what kind of form and sequence it has.

Helping to advance research on Alzheimer’s, cancer and viruses
The research group from Freiburg focuses primarily on the analysis of amino acids and peptides. “Thanks to the aerolysin pore, we hope to be able to distinguish between peptides with great precision, even if they have the same mass but a different spatial structure,” says Behrends. This differentiation between isomers, which is extremely complex and requires a huge effort in traditional mass spectrometry, could provide an insight into the chemical modifications of protein sequences, for example.

We know that the so-called post-translational modifications play a role in illnesses like Alzheimer’s or cancer, and researchers hope to gain new knowledge in virology as well. They therefore believe that their technology has a great potential for medical diagnostics. Especially in the area of epigenetics, nanopore technology could help form a better understanding of processes on a cellular level and thus provide more precisely fitting ideas for the prevention and treatment of illnesses, according to Behrends, who adds: “We want to develop a diagnostic platform for all of this in our cluster.”

Making Baden Württemberg a nanospore technology hub
So far, this technology is “represented only sparsely in Germany,” which is why the future cluster finalist now plans to establish it in Baden-Württemberg and to “develop a critical mass” – including a graduate funding program. The project is coordinated by the Hahn-Schickard-Gesellschaft for applied studies in Freiburg, the director of which is Felix von Stetten who is also the head spokesperson of the future cluster finalist. Other institutions involved are the Medical Center – University of Freiburg, the Max Planck Institute for Immunobiology and Epigenetics, the Fraunhofer Institute for the Mechanics of Materials, as well as several start-ups from Freiburg. Other partners are the University of Stuttgart and representatives from the Innovationsallianz Baden-Württemberg, including the Natural and Medical Science Institute in Reutlingen, the Institute for Laser Technology and Medicine in Ulm, and the Hahn Schickard Institute in Villingen-Schwennigen. Larger companies, like Bosch and Endress & Hauser, are also involved. The project is based on a previous collaboration between several stakeholders in the field of nanopore analysis in Baden-Württemberg, for which the state government granted seed capital of roughly five million euros over two years in 2020. With this funding, they are also working on further key areas of “nanodiag BW” – namely, the training of artificially produced pores to have the same precision and reproducibility as the bacterial pores, as well as integrating nanopores directly into electronic microchips.

The project begins its first phase in February 2023
The new Future Cluster is expected to start the first of up to three implementation phases in February 2023. “The project is aimed at applications,” says Jan Behrends, “but we also had to raise commercial funding.” The researchers have now secured funding from the BMBF for three years in the amount of up to 15 million euros, and two further three-year cycles, each also with up to 15 million euros in funding, are possible.

It is most likely that the future will hold a lot more tiny silver-grey boxes in the laboratories of universities, research institutes, biotech companies or pharmaceutical companies that could standardize and simplify the use of nanopore technology and thus enable a much broader application.

Leiden University: Mapping the universe with a NWO grant of 3.1 million

Queen Mary University of London: Queen Mary research is changing the way we think about bees

Honda India Foundation in association with Government of Haryana inaugurates its...

Leiden University: Mapping the universe with a NWO grant of 3.1...