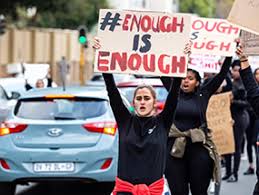 UP’s Centre for Sexualities, AIDS and Gender weighs in on efficacy of national gender justice campaigns

For those of us who work within the sexual and gender-based violence (SGBV) sector, there is a sense of something close to ritualism as we approach the final months of every year. These include the International Day for the Elimination of Violence against Women; World AIDS Day; International Human Rights Day; and then, stretching between the former and latter days, the annual 16 Days of Activism against Gender-Based Violence campaign – in South Africa, it is known as the 16 Days of Activism for No Violence against Women and Children.

For many of us, writing about these days and campaigns is an annual exercise: an opportunity to reflect on the state of SGBV, to implore others to become actively involved in the fight, and to suggest alternative avenues and interventions that might result in a reduction of violence against women and others targeted by perpetrators, such as girls, children, and trans and gender non-conforming people.

To write about the 16 Days of Activism campaign feels particularly difficult this year. Globally, 2020 has been difficult. As the COVID-19 virus spread, and many countries went into various states of lockdown and quarantine, social, economic and political problems seemed to escalate – gender-based violence (GBV) has not been an exception. While an increase in instances of this form of violence has been reported across the globe, the bleak truth is that GBV in South Africa has taken on epidemic proportions for decades.

The femicide rate in South Africa is at least 4.8% more than the global average and, in June 2020, President Cyril Ramaphosa claimed that up to 51% of murdered women in South Africa are killed by their intimate partner. On average, a woman is murdered in South Africa every six hours. This means that, during the 16 Days of Activism against Gender-Based Violence, at least 64 women are likely to be murdered.

These figures are staggering and enraging, and perhaps this is where my reluctance to write about the 16 Days campaign stems from. The phrase “16 days a year is not enough” has been repeated ad infinitum. While this is true, I should add that thinking about GBV in isolation is not and never will be enough. To truly understand social problems of this nature, we need to understand the fundamental issues and challenges that South Africans face. These are not only historical challenges; rather, they are imbedded in the very fibre of contemporary South African society.

In 2020, the theme that has been introduced by government for the 16 Days campaign is ‘Women’s Economic Justice in a Non-Violent and Non-Sexist South Africa’. This is quite a mouthful, and I cannot help but be sceptical: can we reduce decades of injustice to a 10-word slogan and a 16-day campaign?

Those who are interested in social justice will immediately recognise the irony of introducing this theme in a country where both economic justice and non-violence have been completely absent from the lives of many citizens, regardless of their gender. In fact, 2020 has been a particularly distressing year: unemployment has surged during the COVID-19 pandemic; military and police violence came into the spotlight anew as lockdown rules took effect; and the rate of SGBV, some have argued, has increased while households have been in lockdown.

Within these socio-economic circumstances one ought to ask: what would a South Africa that affords economic justice to women look like? What would a non-violent and non-sexist South Africa look like? And, most importantly perhaps, how can we even begin to imagine economic, social and gender justice for women while the most basic needs of all, such as food security, are not being met?

We need to try something different: it is time for imagination and innovation on sexual and gender justice in South Africa.

Christi Kruger is a senior researcher at the Centre for Sexualities, AIDS and Gender at the University of Pretoria.