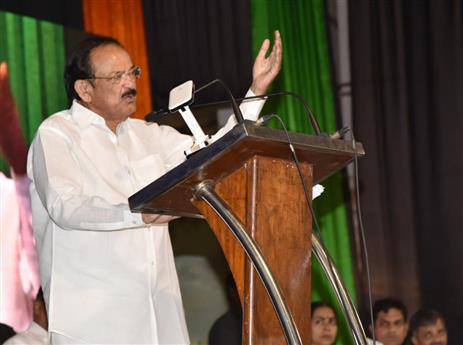 New Delhi: “I believe that there is nothing more important than building a compassionate world. ‘Care’ and ‘share’ is the core of Indian philosophy”, the Vice President of India, Shri M. Venkaiah Naidu said, in Kottayam, Kerala today. He was addressing the gathering at the 90th anniversary celebrations of Akhila Kerala Balajanasakhyam, the largest students’ social service organization in Asia with more than 5 lakh members.

Applauding Balajanasakhyam for striving to make young children more sensitive, compassionate and responsive to the needs of others, Shri Naidu congratulated Malayala Manorama for envisioning and realizing this noble initiative. ‘In keeping with its motto of ‘We Serve’, Balajanasakhyam has been at the vanguard of relief & social service activities in Kerala for nine decades’, he added.

Stating that Balajanasakhyam has, over the past 90 years, has intellectually and socially nurtured the girls and boys of Kerala, the Vice President said that such initiatives would certainly go a long way in contributing immensely to the overall progress and development of our youngsters.

The Vice President expressed his happiness at the fact that Blajanasakhyam had received blessings from none other than the Father of the Nation, Mahatma Gandhi. He applauded ‘Hridayapoorvam Sakhyam’, a platinum jubilee project of Balajanasakhyam which in association with the Madras Medical Mission hospital, had facilitated free heart surgeries to hundreds of ailing children.

Shri Naidu said that there was nothing more important than building a compassionate world. Opining that ‘Care’ and ‘share’ is the core of Indian philosophy, he said that to Indians, the whole world was one large family. ‘Each person is important, especially the marginalized, the excluded and those who are in need of help’, he added

The Vice President said that any organization that does selfless service and promotes empathy and fellow feeling, brings out the best qualities in all human beings. ‘In a way, this is the foundation for building a peaceful, sustainable world’, he concluded.

Shri Naidu opined that in the contemporary world that is getting more and more fragmented and individuals are connecting with each other more and more only through technological devices, it is absolutely necessary that the human interaction must be given the crucial importance that it has.

The Vice President applauded Malayala Manorama for making Balajanasakhyam child and youth focused and geared towards inculcation of the spirit of service and altruism among youngsters. He suggested that it should be mandatory for school and college students to enlist in organizations like NCC and NSS. He reasoned that such a measure would not only instil discipline and team spirit in youngsters, but also would also inculcate the values of sensitivity and empathy in them.

Shri Naidu expressed his happiness at being able to visit Kerala. He said that Kerala had set the developmental pace and established impressively high benchmarks for progress, especially in literacy and education. ‘I am particularly happy to be in Kottayam, the ‘Akshara Nagiri’ or the ‘city of letters’, a city that has made immense contribution to the print media and literature in Kerala’, he added.

The Vice President said that Media, that was often referred to as the Fourth Estate and ‘the watch dog of democracy’, played a huge role in moulding the public opinion.

The Vice President expressed concern over the unwelcome tendencies in the media such as the mixing of news with views, the propagation of fake news, sensationalism and various kinds of biases and vested interests in reporting news and said that such tendencies were detrimental for democracy and should be curbed through strict self-regulation by the media. ‘The media should serve as any democracy’s moral compass’, he added.

The Vice President observed that the citizens of today must have the competence to navigate a world that is changing constantly. He said that ours was an increasingly complex information society and knowledge-driven world and added that Information is vital for progress. ‘Analysing and synthesizing this huge mass of information and facts to produce knowledge is crucial for our advancement’, he reasoned.

The Vice President remarked that wisdom was the defining characteristic to determine whether all the knowledge we acquire and the activities we undertake lead to an improvement in the quality of our lives or not. ‘Wisdom has certain key guiding principles we call values. It is important that we keep this value embedded framework intact’, he said.

The Vice President visited the KC Mammen Mappilai hall, named after and the veteran journalist who was one of the pioneering leaders of print media in Kerala and the founder of Malayala Manorama.

The Governor of Kerala, Justice (Rtd.) P Sathashivam, the Minister for Agriculture, Kerala, Shri. V.S. Sunilkumar, the Member of Legislative Assembly, Shri Thiruvanchoor Radhakrishnan, the Managing Editor, Malayala Manorama, Mr. Jacob Mathew and other dignitaries were present at the function.