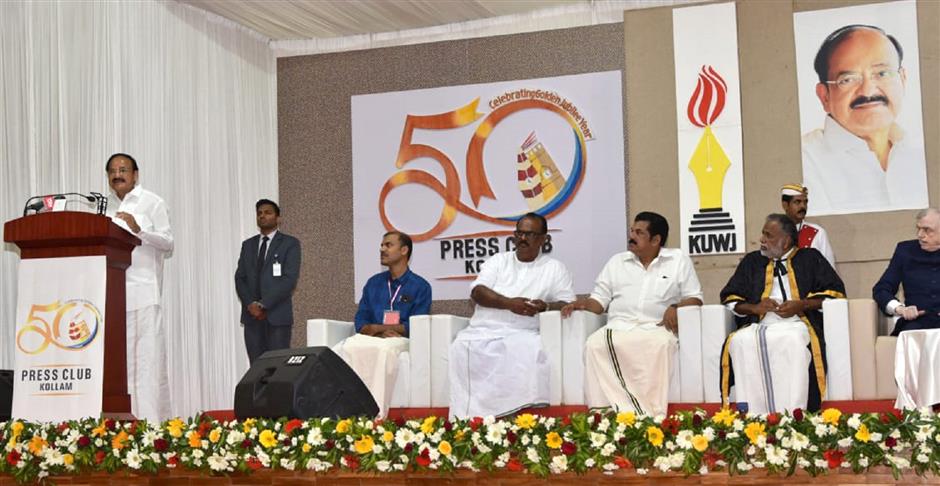 Kollam: The Vice President of India, Shri M. Venkaiah Naidu has said that the time has come for media bodies to come out with a code of conduct for journalists in view of the critical role journalism plays in protecting democracy and in serving the larger good of the society.

Addressing the gathering after inaugurating the Golden Jubilee celebrations of Kollam Press Club, in Kollam, Kerala today, he observed that instead of giving expression to popular feeling, the newspapers these days were giving expression to coloured and partisan views.

The Vice President said that Journalists must never shirk from the core principles of journalism like independence and objectivity and shun unhealthy practices such as sensationalism.

Shri Naidu advocated for prescribing a minimum educational qualification for aspiring journalists and said that it was absolutely necessary to ensure that the standards and ethics of journalism are maintained and not compromised. He further added that journalists should be ensured income security.

The Vice President asked Journalists who are flag-bearers of a noble profession, to ensure that people do not become captive receivers of biased and partisan information.

Saying that the Fourth Estate had always championed the cause of the underdogs and had time and again successfully highlighted the omissions and commissions of those in power, the Vice President said that journalism was a mission for fighting every ill that afflicted the society.

Expressing his concern, he said the same cannot be said of the noble profession any longer as commercial and other considerations were taking precedence over everything else. He said that one would have to read a minimum of four to five major newspapers to get a complete sense of the current developments. Same is the case with the news channels.

Shri Naidu said that such trend was not good for democracy, especially when the fourth estate assumes the role of a gate-keeper and tries to be the arbiter of what the people should read or watch.

Saying that sensationalism, paid news and mixing of news with views and fake news have become the bane of modern-day journalism, the Vice President opined that it was important for a journalist to be objective and remain committed to the core values of journalism.

Asking media organizations to focus more on rural issues including agriculture, Shri Naidu asked them focus on shortcomings in the system and promote accountability.

Instead of focusing on negativity, the Vice President said that it was important for newspapers to accord importance to development journalism and report on challenges relating to agriculture, urban-rural divide, climate change, gender equality, and women’s safety, impact of rapid urbanization, illiteracy, poverty and delivery of health services, among others.