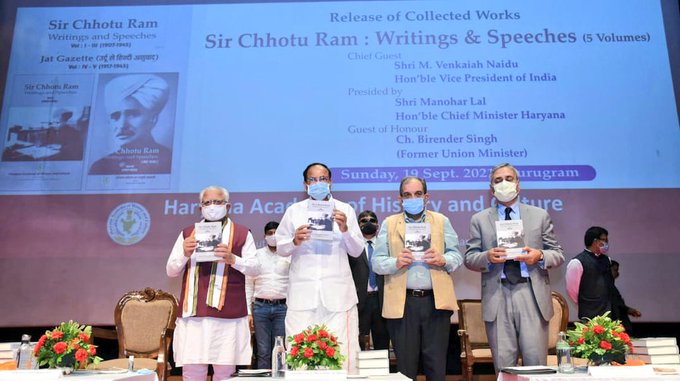 Lauding farmers for not letting the country down even during the trying times of COVID-19 pandemic, he emphasised that our objective should be the overall improvement of rural economy and the well-being of rural society.

Addressing a gathering after releasing five volumes of ‘Sir Chhotu Ram: Writings and Speeches’ brought out by the Haryana Academy of History and Culture in Gurugram today, the Vice President reiterated the need to modernize agriculture and adopt best practices to make it more sustainable and remunerative. ‘Building on our past experiences, we must regularly revisit and renew our strategies on agriculture and rural development and introduce new technologies as part of our efforts to build a self-reliant India,’ he added.

Terming agriculture as our basic culture, he said that our villages not only produce food grains for us but also inculcate in us our Samskaras, our values, and traditions. He also said that agriculture is the backbone of Indian economy and the country cannot progress if our villages remain underdeveloped and backward.

Observing that the entire agri-chain from farm to fork offers tremendous opportunities for remunerative value addition, Shri Naidu called for unshackling this latent potential of the rural economy. He further said that improving the quality of life in rural areas would be our true tribute to revolutionary visionaries like Sir Chhotu Ram.

Complimenting Haryana Academy of History and Culture and all researchers associated with the project, the Vice President said that these five volumes on Sir Chhotu Ram would provide meaningful insights into the agrarian economy and political dynamics of the region during the eventful years of our freedom movement. Shri Naidu also suggested that copies of this valuable publication should be available in public libraries and Panchayat Ghar so that the people could read and learn about the life and work of the great leader.

The Vice President further said that many of our freedom fighters did not get the recognition they so richly deserved and called for making efforts to spread awareness among the present generations about their life and work.

Observing that the independence movement was not just a political movement, he said, it rather had a deep social and economic reformist agenda as well. He praised many a contribution of Sir Chhotu Ram for the cause of nation building. ‘He worked tirelessly to bring reforms in the agriculture sector and to free farmers from the exploitation of moneylenders,’ Shri Naidu added.

Mentioning that Sir Chhotu Ram was the first person to visualise the Bhakhra Nagal dam on Sutlej river, the Vice President said that being a farmer’s son he had deep understating of the farmers’ problems and always strived to find solutions for them. He also praised the legendary leader for his bold initiatives in the field of social reform and education.

Recalling Sir Chhotu Ram’s strong opposition to the partition of the country, the Vice President said that he was a true nationalist who dreamt of a united and strong India. Calling Sir Chhotu Ram as a man of renaissance, Shri Naidu said that he ushered in new ideas in polity, society and rural economy. He further said that our younger generation should take inspiration from great personalities like Chaudhary Chotu Ram ji, Pandit Deen Dayal Upadhyaya Ji, Ram Manohar Lohia Ji and Chaudhary Charan Singh Ji and strive to build an Atma Nirbhar Bharat.

Complimenting former Union Minister, Chaudhari Birendra Singh for endeavouring to popularise the legacy of Sir Chhotu Ram, Shri Naidu urged all state governments to prepare similar compilations on prominent leaders from their respective states. He exhorted the youth “to read books on great leaders such as Chotu Ram, visit historical places such as their birthplaces and draw inspiration from their lives.”