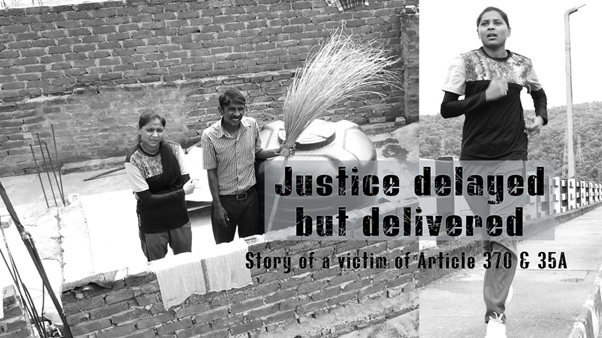 “When Article 370 was abrogated, oppressed people of Jammu got their rights back”

Panaji: “This idea came to my mind around 2012, after a friend of mine who was doing research found that a section of Dalits in Jammu and Kashmir were denied their constitutional rights. Dalits from Punjab were taken to Jammu and Kashmir for menial jobs such as scavenging and sanitation and for decades, they were forced to be confined to these very same occupations. They were denied even the fundamental rights of equal justice and equal opportunity, as guaranteed in our Constitution. I was struck as to how our constitution, framed by Dr. Ambedkar, could end up being manipulated to deprive some people of these fundamental rights. We did a documentary on article 35A in 2015, and we felt that the people who do not have a voice need to be heard.” This is how Kamakhya Narayan Singh, Director of the IFFI 51 Indian Panorama Non Feature film Justice Delayed but Delivered, described the circumstances which laid the seed for his film. He was addressing a press conference today, January 23, 2021, at the 51st International Film Festival of India, following the screening of his film at the festival yesterday.

The Director says that the 15-minute Hindi documentary film shows how a person stakes claim to his constitutional rights. “I feel proud of what we did through this documentary. The short documentary tells the story of struggle and hope of Radhika Gill and Rashmi Sharma, both belonging to the Valmiki community in J&K. The film revolves around the abrogation of Article 370 of the constitution.” Radhika and Rashmi were both victims of discrimination due to Article 35A of the Indian Constitution, which provided special rights and privileges to ‘permanent residents’ of Jammu and Kashmir. Their predicaments end in the year 2019 when Article 370 is abrogated and Article 35A deleted from the Constitution of India, thereby conferring all the rights which they deserved since birth, said the Director.

Narayan Singh points to the change that has occurred in Jammu and Kashmir after abrogation of Article 370. “Justice has been delivered to Dalits, women, Gorkhas, West Pakistani refugees and displaced persons living in Pakistan-Occupied Jammu & Kashmir. Right to Equality is everywhere, the Constitution of India guarantees it to everyone, including to the last citizen. When Article 370 was abrogated, the oppressed people of Jammu got their rights back, on par with other citizens of the country.”

He emphasised that the right of every citizen in the country needs to be met as it is guaranteed under the Constitution. He pointed out that justice was not prevailing in J&K when Article 370 was in force and the citizens there were not enjoying many constitutional provisions.