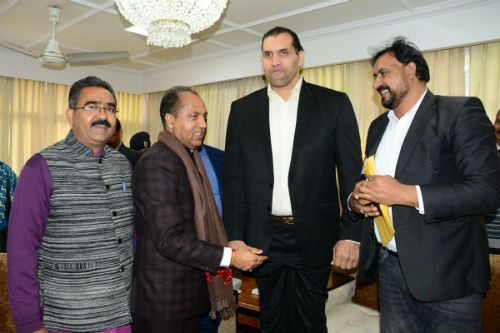 Report by Vijyender Sharma; Dharmshala: World famous heavyweight professional wrestling Champ of World Wrestling Entertainment (WWE) Dilip Singh Rana, ‘The Great Khali’ called upon Chief Minister Jai Ram Thakur at Dharamshala today and briefed him about his plans to organise the world heavy weight wrestling championship in Himachal Pradesh in near future. He said that earlier in previous government he had forwarded his proposal for the same but it did not got through for the reason well known to the previous government.

He said that organising the wrestling championship in Himachal Pradesh would not only bring name to the State but maximum share of funds gathered from this championship would be given in Chief Ministers Relief Fund.

Chief Minister asked the Sports Minister Shri Govind Thakur to further tie up for holding wrestling Championship in the State, which will also give boost to tourism.