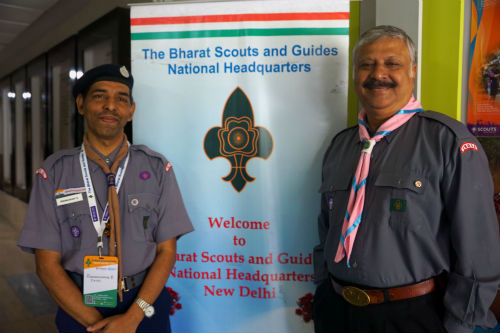 New Delhi: WWF and the World Organization of the Scout Movement (WOSM) are deepening their collaboration to drive global awareness and action on nature and the environment, in recognition of the enormous challenges facing our planet and the important role of young people in creating a more sustainable world. Starting with Earth Hour, building mass awareness on the importance of nature will be a priority, with Scouts around the world taking part as a sign of the close collaboration between the two organisations.

In India, the Bharat Scouts and Guides (BSG) have entered into a partnership with WWF-India to take forward the message of conservation of the environment to communities across the country, through 5.6mn registered Scouts and Guides. Being rolled out with Earth Hour 2018, 5.6mn Bharat Scouts and Guides will give up their plastic woggles, a signature element of the BSG uniform, as a part of the “#GiveUp” to Give Back initiative, replacing it with more sustainable and eco-friendly options.

Plastic is one of the biggest banes of the environment today. According to reports, more than 1,00,000 mammals, one million sea birds and other marine aquatic life die because of the plastic they ingest or get entangled in. In 1950, the world’s population of 2.5 billion produced 1.5 million tons of plastic; in 2016, a global population of more than 7 billion people produced over 300 million tons of plastic – with severe consequences for marine plants and animals. India contributes 60% of the plastic waste that goes into the world’s oceans every year. According to an estimate, 99 per cent of all seabirds will have ingested plastic by mid-century.

Speaking about the partnership, Mr. Ravi Singh, SG & CEO, WWF-India, said, “WWF-India is very proud to be associated with the Bharat Scouts and Guides. The spirit of the Scouts movement is reflected in their passion for the outdoors and is akin to a future where humans live in harmony with nature. With more than 5mn persons associated with Bharat Scouts and Guides in India, we believe that their valued support will help us take the message of conservation forward, inspiring people across the country to adopt lifestyles that are environmentally sustainable.”

Earth Hour has been a game-changer for popularizing climate and environmental action across the globe. This year, in India, Earth Hour 2018 will see the launch of the “#GiveUp” to Give Back movement, drawing the attention of individuals, organizations, communities and institutions to habits and practices that are detrimental to the environment and inspiring them to reduce their footprint and adopt sustainable alternatives for a better planet.

“World Scouting is proud to support Earth Hour, a movement that has inspired millions around the world to take action in support of our planet,” said Ahmad Alhendawi, Secretary-General, WOSM.

Mr. Krishnaswamy.R, Director, Bharat Scouts and Guides said, “Our decision to give up plastic woggles as part of Earth Hour’s “#GiveUp” to Give Back movement is the first initiative of this partnership. We, at BSG, uphold the values of protecting Mother Nature as one of our core tenets of our program and we believe that the force of young minds across the country can take this message to over 50mn people in India. It is our duty to protect the home we live in and we will fervently follow this mission by adopting eco-friendly practices wherever possible in our duty to serve the country and the world.”

World Scouting and WWF first worked together in 1973 on environmental education. The ongoing successful partnership aims to help achieve the United Nations Convention on Biological Diversity’s Aichi Biodiversity Target 1, so that hundreds of millions of people understand the values of biodiversity and the current critical condition of our planet. Better informed and aware, people can take actions to protect biodiversity and nature, live more sustainably and expect the same of businesses and their governments. It will also include a new version of one of their earliest joint initiatives, the badge formerly known as the World Conservation Badge (Panda Badge).As part of its commitment to the environment, WOSM has also established a network of Scout Centres of Excellence for Nature and the Environment (SCENES) around the world, to enable Scouts, the local community and other visitors to connect and engage with nature.