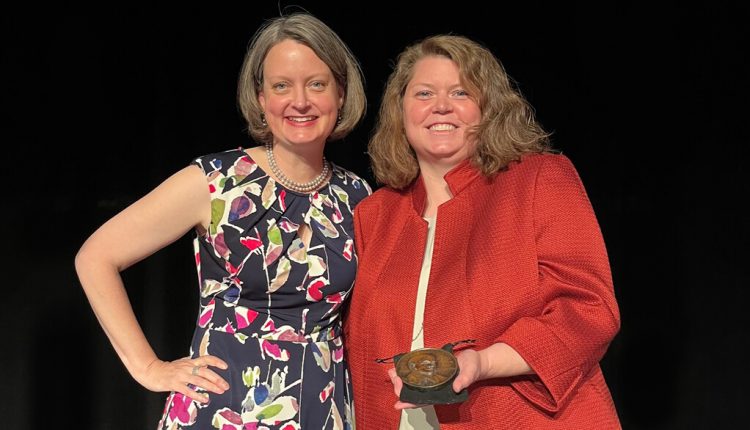 Alison Gilchrest, director of Yale’s Institute for the Preservation of Cultural Heritage (IPCH), has been awarded the Forbes Medal by the American Institute for Conservation (AIC) in recognition of her distinguished contributions to the field of cultural heritage conservation.

Presented occasionally, the medal honors individuals whose work on a national or international platform has significantly advanced the preservation of cultural heritage. In honoring Gilchrest, the AIC celebrated her “collaborative, creative, insightful, and generous” work to forge collaborations, support worthy programs, and integrate the sciences and humanities, said Suzanne Davis, the organization’s president.

“Alison has a unique ability to converse across disciplines, see the bigger picture, identify the ways in which cultural networks could be strengthened, and foster meaningful connections,” Davis said while presenting Gilchrest the medal during the AIC’s annual meeting last month in Los Angeles. “She leverages her professional roles to support programs and individuals that broaden the reach of conservation while emphasizing the scientific and academic rigor of the discipline.”

Only 11 individuals, including Gilchrest, have received the Forbes Medal since its inception in 1994. It was last awarded in 2017, when then-U.S. Rep. Edward Royce and then-U.S. Rep. Eliot Engel were honored for their bipartisan effort to pass the Protect and Preserve International Cultural Property Act, which imposed stronger import restrictions on antiquities trafficked out of Syria.

Representatives from more than a dozen museums and cultural heritage institutions, including the British Museum, the American Museum of Natural History, the Whitney Museum of American Art, and the Art Institute of Chicago, submitted letters supporting Gilchrest’s nomination for the medal. The letters, written by Gilchrest’s peers, cite her ability to work across disciplines, build lasting networks, and find workable solutions to difficult problems. They also provide a sense of her dedication, resourcefulness, and willingness to lend colleagues a helping hand.

In March, Gilchrest was appointed director of IPCH, Yale’s interdisciplinary hub for preservation and conservation treatment, research, and programs. As director, she is working to increase collaboration across Yale’s libraries, museums, and special collections, expand conservation programming throughout campus, and build ties with the global heritage community.

She joined IPCH in January 2020 as its inaugural director of applied research and outreach. In that role, she facilitated research, training, and professional development collaborations between the institute and other cultural heritage institutions, with a focus on strengthening Yale’s relationships on the African continent.

Gilchrest came to Yale from the Andrew W. Mellon Foundation, where for more than a decade she oversaw the largest private grantmaking program for cultural heritage in the United States, leading national and international initiatives to promote collaboration within the conservation field.

“[Alison] truly believes that collaborations and network building are key to a thriving cultural heritage sector, and she recognizes where resources might lead to change that will advance and sustain the profession,” said Davis, the associate curator for conservation and head of the Conservation Department at the Kelsey Museum of Archaeology at the University of Michigan. “…[Her] work has been vital to initiatives that strengthen science, increase diversity, and encourage partnerships with allied fields.”

The Forbes Medal is named for Edward Waldo Forbes (1873–1969), who directed the Fogg Museum at Harvard University from 1909 to 1944. In 1928, he founded the Center for Conservation and Technical Studies (now the Straus Center for Conservation), the country’s first fine arts conservation treatment, research, and training facility, at the Fogg. After retiring from the Fogg Museum, he founded and served as director of the American Research Center in Egypt.