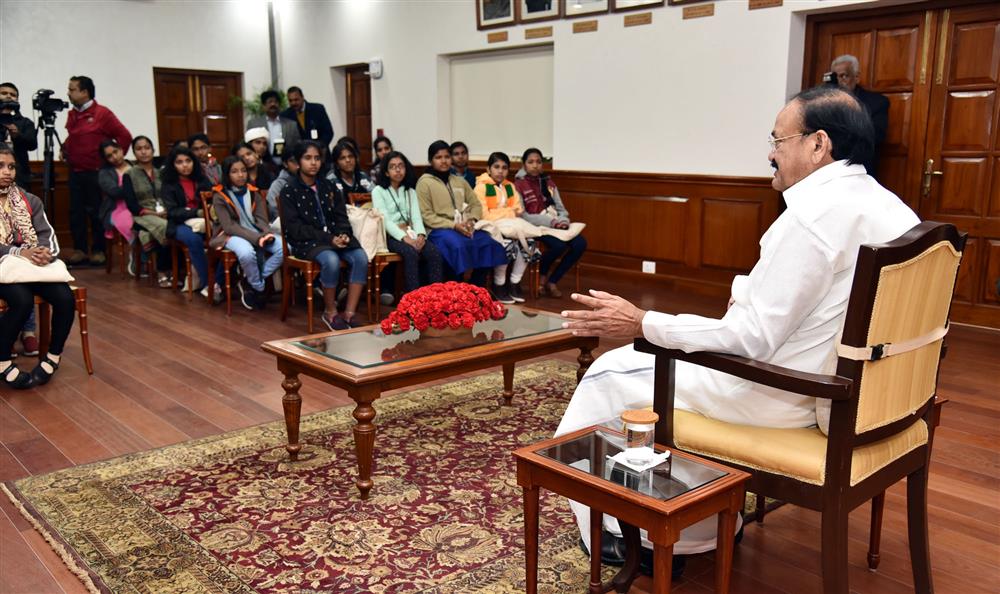 Young people must strive to serve the less fortunate and learn to be empathetic to needs and sufferings of fellow citizens: Vice President

New Delhi: Vice President of India M. Venkaiah Naidu has asked young students to work to serve the less privileged and less fortunate. He said that it was very important for the younger generation to be empathetic to sufferings and struggles of fellow citizens and to strive to do something meaningful for their betterment.

Shri Naidu was interacting with a group of Students from Kerala, here today, who are in Delhi as a part of a tour programme being organized by ‘Mathrubhumi’, a Media House from Kerala, in connection with the 150th Birth Anniversary celebrations of Mahatma Gandhi.

The Vice President stressed upon the importance of education in bringing social, cultural and economical transformation in the country. He called upon students to imbibe a habit of constant learning and embrace emerging technologies to keep pace with the changing world.

Expressing concern over the rising incidence life style disease, Shri Naidu urged the students to be aware of the hidden dangers of modern life style, comprising of unhealthy food and physically dormant jobs. He asked them to develop the habit of regular physical exercise, especially practicing Yoga and dedicate time for outdoor activities, to stay healthy.

He wanted students and the younger generation to respect nature and learn to live with nature. ‘You must keep it in mind that nature and culture together work for the betterment of humanity’, he said.

Aalto University: The human ear detects half a millisecond…

Observing that unity in diversity is India’s greatest strength, Shri Naidu asked youngsters to study the History of this great country diligently and to learn to appreciate the uniqueness of Indian culture. ‘They must be aware of our country’s great culture and timeless traditions and work to fortify India’s spirit’, he said.

Unveiling his vision of building a strong, stable, unified, prosperous and inclusive India, the Vice President encouraged the citizens of this country to perform their duties with utmost sincerity, to the best of their capabilities.

Applauding Mathrubhumi for celebrating the 150th Birth Anniversary of Mahatma Gandhi, Shri Naidu said that the Mahatma had given us the most powerful weapons of truth and non violence to defeat the greatest of odds. ‘Mahatma Gandhi’s vision of service and humanism has inspired and motivated generations of world leaders’, he added.

The Vice President said that Gandhiji was an inspiration to all mankind. Speaking of Gandhiji’s deep sense of compassion and inclusiveness that defined his outlook, Shri Naidu said that the Mahatma truly believed that cleansing our inner being of all evils was as important as cleansing our countries of servitude.

Expressing great pride at the Indian civilization that has always considered the world as one family, (Vasudhaiva Kutumbakam), the Vice President said that our commitment to the cause of climate change, solar energy and conserving nature, will hopefully, get reflected in educating students and making them globally responsible citizens.

Urging the students to speak only in their mother tongues at home, the Vice President asked them to always remember with love and gratitude the Mother, Mother tongue, Motherland, Birth place and Guru.

iednewsdesk Jun 12, 2021
Three students of the Politecnico di Milano won the first prize at the international architecture competition The…

Aalto University: The human ear detects half a millisecond delay in…