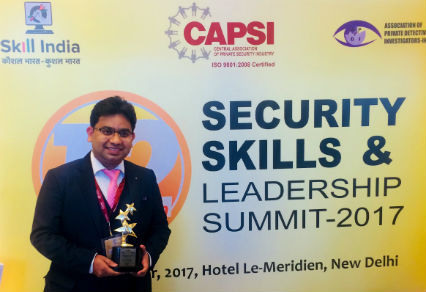 The agenda of this conference gave an opportunity to the members of the association to raise an alarm about the pertinent issues related to PSARA, GST, Labour and Skilling of the Security Guards and Supervisors.

The Honorable Chairman of CAPSI & APDI, Kunwar Vikram Singh addressed the members mentioning the strength and the weaknesses of the Private Security industry. He said “the sector currently employs 7.5 million people in 22,000 private security agencies. The current GST regime will collapse the sector financially and that there is a need for amendments of the Private Security Agencies (Regulation) Act in consultation with the security agencies. They urge the prime minister to proactively consider their demands and save the sector which could prove crucial for success of skill India and also in generating jobs”.

PVR expands its luxury formats with the launch of First…

While at the award ceremony, the most popular and much awaited award for the “Young Security Entrepreneur of the Year” was presented to Mr. Akash Saxena, Founder & Director, Topshield Security Services Pvt Ltd.

“It feels great to be a part of an industry which is thriving each day. And receiving this award is just fulfilling my dream and the power to bring changes that I foresee”, says Mr. Akash Saxena.

Topshield Security has seen a tremendous growth within a decade under his guidance, laying emphasis on the significance of quick response team in their working.

PVR expands its luxury formats with the launch of First Director’s Cut in Haryana,…

66 Students of Aakash Institute in Telangana Score an Impressive 95%…

To make education accessible to every child, JK Cement constructs 250…