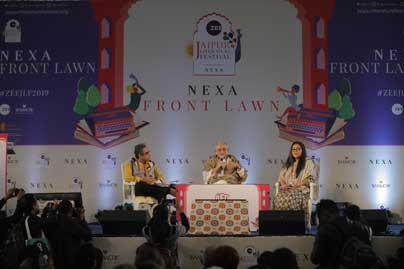 – Second day of Jaipur BookMark featured conversations including sessions on translations, the business of books, and book cover designs, as the winner of the Oxford Bookstore Book Cover Prize was announced

– Usha Uthup, Jasbir Jassi and Kutle Khan enthralled audiences at the Jaipur Music Stage which also featured a conversation ‘Pop Goes Music! How Independent Music Popped Up And Grew Up Beyond Movie Soundtracks’, with Usha Uthup, Amit Kilam, and Chayan Adhikari in conversation with Sarthak Kaushik.

The ZEE Jaipur Literature Festival entered its 12th year on a chilly Jaipur morning today with all of its characteristic joie de vivre intact. Early risers flocked to grab seats at the NEXA Front Lawn of the Diggi Palace Hotel, which itself was dressed in its colourful best and reverberated with heady beats from dhaaks typical to Bengal and Assam, and listened to their favourite speakers – icons, writers and performers. Attendees were welcomed by the haunting and rich voice of singer Shruthi Vishwanath. The Pune-based musician, composer and educator, who is trained in the Carnatic and Hindustani traditions, was accompanied by musicians Yuji Nakagawa on the sarangi and Shruteendra Katagade on the tabla. Vishwanath had the attention of the audience with her very first note. She opened the Festival’s Morning Music with a musical rendition of the words of 17th-century spiritual poet Tukaram whose lyrics reinforced the profound depth found in the ‘word’.

Music led the way to the inaugural session of the iconic Festival’s twelfth edition which began with Sanjoy K. Roy, Festival Producer and Managing Director of Teamwork Arts, emphasising on the need to respect writers at such divisive times and expressing his gratitude to the Diggi family for a venue that in all its vibrancy, reiterates the Festival’s spirit of multiplicity. The Festival endeavours, he said, “to celebrate, talk, debate, discuss and most importantly perhaps, create a space for dissent in our extremely divisive world”. The effort is “to ensure that all of these people we are made to fear as ‘the other’, we are able to understand them, experience them, read them and celebrate them.”

Co-Festival Director Namita Gokhale also spoke strongly about creating inclusive spaces, noticing how “we are witnessing a unique literary moment in India,” where voices from 22 languages are finding home and publishers are mainstreaming translations like never before. While the Festival continues to remain rooted in India, it has also expanded globally with editions being organised in London, Adelaide, Houston, Boulder and New York. She mentioned the growth and reach of Jaipur BookMark, a book conclave running parallel to the Festival from January 23rd to the 26th, noting how it “creates collaborations and give us synergies between and across South Asia”.

Punit Misra, CEO of the Domestic Broadcast Business of ZEE Entertainment Enterprises Limited, shared that ZEE was honoured to be associated with the Festival because it is a “reaffirmation of our faith in the written word.” B.D. Kalla, Rajasthan Minister of Art, Literature and Culture, expressed the government’s gratitude, adding how culture is a social and historical phenomenon, and how our collective crusade against superstition and social classification gains strength through such festivals.

Award-winning British poet and prose writer Ruth Padel, who has been closely associated with the Festival for several years, addressed the inaugural. Padel read out a charming poem about the pink city, a piece that seamlessly interwove space with relationships. Her second poem, she described as “a little hymn to blue green algae, a contemplation on the genetics of the cell and how it first got here”.

This led seamlessly to the Keynote Address by Nobel Laureate in Chemistry awarded to him for his research on ribosomal structure, Sir Venki Ramakrishnan. In “a talk across the divide between humanities and sciences”, he quipped, “the same people who proclaim their ignorance about science and math would consider me an uncivilised bore.”

As always, nothing deterred the fervour of the crowds – neither inclement weather, nor the cold winds or the slush on the grounds. They attended sessions with focus, asking questions, taking photographs and most importantly, making memories. Over the next four days, many more debates to allow a seamless flow of ideas will embody the spirit of this incomparable grand dame of a festival.The action moved from Diggi Palace to Clark’s Amer as the evening came down for some electrifying music at the Jaipur Music Stage to fire up the skies further – with headlining performances by Usha Uthup, and Jasbir Jassi in collaboration with folk artiste Kutle Khan.

A celebration of ‘All Things Music’, the Jaipur Music Stage kicked off in style today