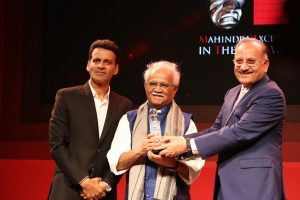 New Delhi: New Delhi, 11th March: The theatre fraternity came together tonight for a red-carpet awards gala at the 12th Mahindra Excellence in Theatre Awards (META) Festival. Curated by the Mahindra Group and Teamwork Arts, the week-long extravaganza came to an end as the best from the world of theatre were awarded the META at The Taj Mahal Hotel, Mansingh Road, on Friday.

The annual awards, which recognise excellence in theatre nationally, celebrate the intrinsic diversity and rich cultural traditions of India. The META is India’s most comprehensive award and a premier honour for the theatre fraternity, awarding on-stage and off-stage talent across 14 award categories, including the prestigious Lifetime Achievement Award.

Like every year, this year’s short-list of META was diverse and showcased the best of Indian theatre. For a week, the festival staged 10 nominated plays that revolved around motifs ranging from mythology and caste to complex love stories and human emotions. The line-up featuring plays in English as well as several Indian Languages including Hindi, Bengali, Malayalam, etc., received an overwhelming response from the audience as the shows ran to packed houses. The Jury for META 2017 comprised theatre stalwarts Dolly Thakore, Mahesh Dattani, Sachin Khedekar, Seema Biswas, Avijit Dutt and Maya Krishna Rao.

While Mahabharata bagged the award for Best Production along with Best Director and Best Choreography, I Don’t Like It As You Like It, won Best Ensemble, Best Stage Design and Best Actor in Supporting Role (Female), and Elephant in the Room won Best Actor in a Lead Role (Female), Best Costume Design and Best Light Design, giving them three awards each. The award for Best Actor in a Lead Role (Male) was jointly presented to Anirban Bhattacharya (Awddyo Shesh Rajani) and Rajendra Panchal (Katha Sukavi Suryamall Ki).

Noted theatre veteran, Arun Kakade was conferred the META Lifetime Achievement Award for his contribution to Indian theatre. He got a standing ovation as he received the Lifetime Achievement Award. He said, “I am so happy that META has been promoting Indian theatre for the last 12 years. There is diverse variety in the plays that come here. I have staged my plays here thrice before, but at the age of 86, I wasn’t expecting any award really. I am thankful to the META Festival organisers for this prestigious honour.”

Veterans from theatre, cinema, music, and dance presented the coveted awards to the ecstatic awardees andnoted personalities like Manoj Bajpayee, Meera & Muzaffar Ali, Aditi Mangaldas and Seema Biswas were among those who gave away awards.

Commenting on the awards, Jay Shah, Head, Cultural Outreach, Mahindra and Mahindra Ltd. said, “The 12th META has concluded with all the drama, fanfare and applause it deserves. The 10 best productions from across India vied for the top honours in the nations capital. While awards were presented to just a few, each META participant has been a winner. The Mahindra Group too feels a great sense of victory for being able to establish a platform that defines excellence in Indian Theatre. A Rise moment for all!”