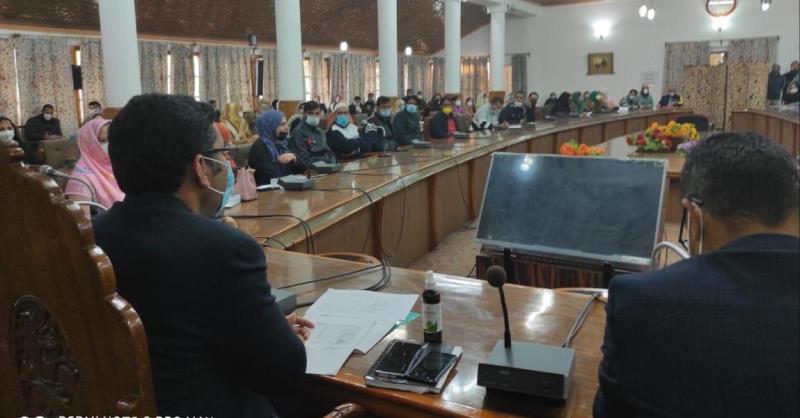 Srinagar: The Srinagar administration has embarked on an ambitious project to transform all government schools with owned buildings in the district on modern lines equipping them with smart facilities and modern infrastructure.

Under the project a total of 180 schools including 120 in urban areas and 60 in rural areas of the district are being upgraded in terms of facilities. These schools will be equipped with modern facilities hrough interventions at infrastructural and operational levels.

The project follows successful completion of the pilot project of modernising 25 selected government schools taken up and completed during the last fiscal.

This was informed in a meeting convened here at Banquet Hall under the chairmanship of the Deputy Commissioner Srinagar Dr Shahid Iqbal Choudhary.

The meeting with heads of schools to be upgraded as part of this project was informed that an amount of 6 crore rupees has been earmarked for upgrading of 120 schools located in urban areas of the district under special plan.

It was informed that funding has in fact been released in favour of 25 schools located in urban Srinagar. It was informed that another 70 schools – which have already been partly equipped with modern facilities under the GoI’s Samagra Shiksha scheme – will receive the required funding in due course.

During the meeting extensive discussions and interactions were held on components and the aim of the smart school project envisaging modernising of public schools to bring them at par with private schools in the district. Headmasters of 25 model schools upgraded last fiscal were also present in the meeting sharing experiences and feedback.

In addition to 120 schools in urban Srinagar at least 60 schools are also being modernised in rural Srinagar. These schools are being upgraded to smart schools under the J&K government’s Back to Village programme.

In each rural block of the district 15 schools have been identified for upgrading and modernising under the ambitious smart schools project. These schools include primary and middle schools and have been selected through the Gram Sabha. It was informed that the project targeted for completion in four to five months will include upgrading of entire infrastructure and and improvement of learning outcomes through a rang of interventions including capacity building of teachers.

The meeting was informed that as part of this ambitious project a host of interventions are being made aimed at enhancing the learning outcomes of public schools in the capital district.

Giving details it was informed that some of interventions being made include refurbishing of buildings where required, upgrading of furniture and equipment, round-the-clock power and water supplies, establishment of libraries, science laboratories, IT labs and smart classes, HR Management and development of teachers, concurrent evaluation and society involvement, additional classrooms where required, separate toilets, sporting infrastructure and games, skills labs, pure drinking water availability, innovation grant for development of models, capacity building and training of teachers.

Speaking on the occasion the DC said that work is being started in around 100 of these schools located in both urban and rural areas of the district adding that the entire project is targeted for completion in six months.

He said the project is the closest to his heart adding that all that will be required to upgrade public schools in the district will be done adding that the district administration is keen on equipping them with the latest facilities and transforming them on modern lines the aim being to improve the learning outcomes in the public school domain.

It was informed that the 25 smart schools established earlier last fiscal will be provided additional facilities to further equip them. Teachers from these schools shared their experience with newly selected schools. A dedicated team has been constituted for planning , implementing and monitoring the project.

Training of Micro-observers held in Kishtwar