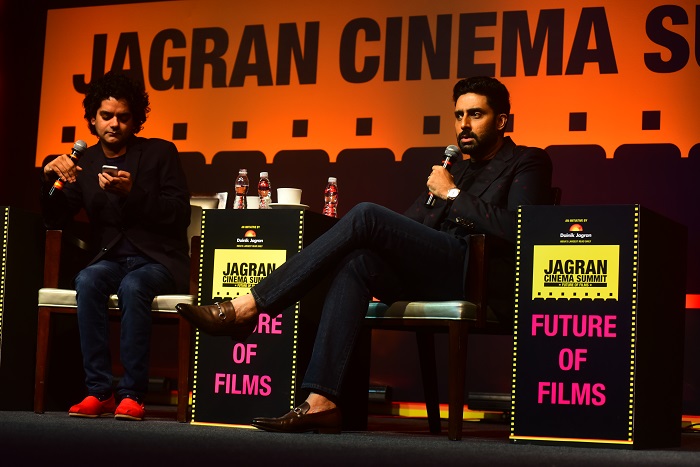 Mumbai: Celebrated filmmakers and creative marketers from across the country came together to take a deep dive into the future of cinema at the second Jagran Cinema Summit held at the Taj Santacruz. Film Critic & Festival Director, Jagran Film Festival, Mayank Shekhar also announced the opening film for JFF- the much awaited, Lady Gaga’s A Star is Born. The event began with a passionate session spearheaded by Mayank Shekhar with well renowned director Rohit Shetty who gave helpful pointers on ‘How to be the Audience’s BFF (Best Friend Forever),’ something most aspiring filmmakers strive to do.

“I always keep the mass appeal in mind. I’m happy when my audience is happy. That gives me a high. To understand what will work, you need to observe and spend time with the audience, trust your instinct and delve deep into the history of cinema, that’s the only way you will be brave enough to create something great.”

Cinematic effects are one of the key factors that influence an audience’s ability to connect and relate with a piece of art they are viewing. With the role of cinematography becoming increasingly important in any production, Rajeev Kumar and Danny Wilson from Dhrishyam VFX showcased an insightful presentation on ‘How Effects Make Cinema Special’.

“Not only does VFX need talent, but also imagination. This is the only industry that doesn’t need education parameters to apply for the job. The rising digital market has opened new avenues. Now, it’s not only about cinema and TV, but also the web! With this extended TV, digital and film market, there’s a huge potential to nourish content to be more visually presentable with VFX. It’s also important to be connected with the director during the script phase. Even if the director is not a fan of the effects, VFX can also build set designs, giving the director what he wants without sacrificing on quality.”

Gracing the audience with his magnanimous personality and witty charm, Abhishek Bachchan presented his views on ‘The Evolving Idea of the Bollywood Star’.

“When I decided to take a sabbatical, I knew it was what I had to do for my career. My father thought it was the biggest mistake he made when he did the same thing. I think times were different then. In those days, he felt like he had lost touch with what the audience wanted. Suddenly from the angry young man, people revered the romantic NRI hero. He felt he had lost touch. But now, you’re a lot more accessible. I was very sure how I would execute this plan of mine. Today, with social media it’s very easy to stay abreast with what’s going on so I was sure I wouldn’t lose touch. I just needed to recalibrate how I was doing the work, not the work I was doing. I was confident about the person I aimed to become. Life and filmmaking isn’t meant to be easy. It’s important to be challenged on a daily basis.”

The panelists weighed in sharing their beliefs that film content and exhibition is here to stay and one would be foolish to ignore digital discontinuity – not just in the movie business, but also the platform business. Vijay Singh gave an analogy of how hotels haven’t shut down because of Airbnb, it’s just the business model that has changed and one had to merely adapt to the way industries evolve. The kind of content that is produced has to be tailored to what resonates better with OTT platforms or theatres but the overall business is definitely here to stay.

Subsequently, Vikramaditya Motwane shared his views by stating that while directors love the cinematic experience, it’s more about getting the audience to watch it. According to him, movies in theatres would always be large screen entertainers whereas every other nuanced bit will be on OTT platforms and there’s nothing wrong with that. In the end, everyone unanimously agreed that cinema, certainly isn’t dead.

As the summit drew to a close, Chaitanya Chinchlikar (Business Head and Chief Technology Officer, Whistling Woods, VR Lab) took everyone on a journey through the history of VR and gave a presentation on the ‘Way Forward For Cinematic Virtual Reality’. He showcased how over the ages, there has been an exponential increase in diversity, richness, opportunity and quality of life in media and entertainment. From the Stone Age, he introduced everyone to the immersive age as he addressed the problems that need to be solved when it comes to VR and displayed effective VR content guidelines to follow while creating the magic of cinematic virtual reality.

With the steady rise in a number of OTT platforms, the event concluded with the vivacious Ekta Kapoor talking about “Is it time to go OTT on OTT?”

“Acceptance is the biggest word we should learn. I have as much fun making a show like Naagin as much as I do promoting a lipstick. Folklore should be enjoyed and revelled but we are cagey. I wanted to do drama and I realised that Indian families want to watch things together, so that’s the experience I gave them. Experiences changed over time, so films have to change based on that. The convenience OTT gives you is the choice that you have now. You don’t have to sit through a 3 hour movie in a theatre even though you don’t like it. Don’t like something? Watch something else! Mobile is going to decide what people want to watch. They might want to watch both Naagin and Narcos or a romantic movie or a thriller, there’s a whole world out there!”

On the occasion of the second edition of Jagran Cinema Summit, Basant Rathore, Sr. VP- Strategy, Business Development and Brand at Jagran Prakashan Ltd, “Technology has not just revolutionized movie making, but also revolutionized movie-watching. With India being the fastest growing digital markets in the world, a whole lot of upheaval is still about to take place. The film industry is at the cusp of change and needs industry thought leaders to come forward and discuss the future of cinema. The Jagran Cinema Summit lead the discussion with various stakeholders from the film industry.”

The Jagran Cinema Summit has been curated with some of the biggest names in the industry, solely to discuss pure cinema and its way forward. The 9th Jagran Film Festival will be held in Mumbai between September 27th – September 30th, 2018.

IndiaSkills 2018: The Road to Making India the Skill Capital of the World