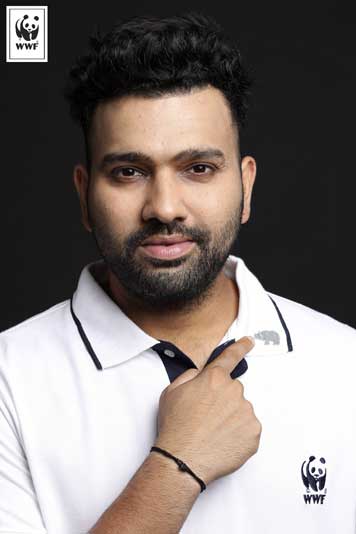 New Delhi: Rohit Sharma, renowned Indian cricketer and the current captain of the Indian men’s cricket team for the ongoing Asia cup, has pledged his support to WWF-India’s rhino conservation efforts in the country. Announced on World Rhino Day, Rohit will join several other celebrities across the globe supporting WWF’s conservation activities across countries. In India, Rohit will join the likes of Amitabh Bachchan, Aamir Khan, VidyaBalan, fellow cricketer ShikharDhawan and others who have supported WWF-India’s work in the past. As one of the country’s largest conservation organisations, WWF-India has been working on rhino conservation for over four decades and has been instrumental in many milestones and successes in protecting the Greater One Horned Rhino or the Indian Rhino.

India is home to 82% of the world’s rhinos. Once found all along the Indo-Gangetic-Brahmaputra valley, the Indian rhino is now only found in select pockets in India and Nepal, with only about 3500 of them left in both India and Nepal. This is a result of excessive poaching for their horn and the expansion of human settlements and change in landuse patterns, leading to a loss of rhino habitats. In the country, this large mammal is found primarily in three states – Assam, West Bengal and Uttar Pradesh. A key initiator of the Indian Rhino Vision (IRV) 2020 in Assam in partnership with the Assam Forest Department and other partners, WWF-India is currently working to ensure that a breeding population of the Greater One Horned Rhino in India is spread across 10 Protected Areas by 2030.

In order to raise awareness about the Indian rhino’s significance and to effectively communicate WWF-India efforts towards the conservation of the species, Rohit Sharma will be a huge asset to the organization. Rohit has also lent his autographed bat and jersey to be auctioned to support WWF-India’s conservation efforts in India. As a renowned cricketer of international stature, Rohit will use his position as a platform to spread the message of protecting rhinos and preserving their habitats.

Speaking about the association, Ravi Singh, CEO and Secretary General, WWF-India said, “We are encouraged that sportsmen like Rohit are coming forward to support the call for conservation. Rohit’s contribution to international cricket is well known and his supporting the conservation of rhinoceros in India will help the cause of the species. We welcome Rohit into the WWF family.”

For Sharma, the cause of rhino conservation is one that is very close to his heart. “My love for rhinos sparked when I first heard about Sudan, the last male northern white African rhino who passed away this year thus leading to the inevitable extinction of the entire species and that broke my heart. As the world and I mourned for my fallen friend Sudan, I researched the best way for me to help prevent something like this happening and the best way I know how is to create awareness. After getting in touch with WWF I learnt that 82% of the world’s rhinos reside in India and I am honoured to be WWF-India’s rhino ambassador to spread awareness and do my bit to contribute to the protection and survival of the rhino and help make this world a better place for them’’