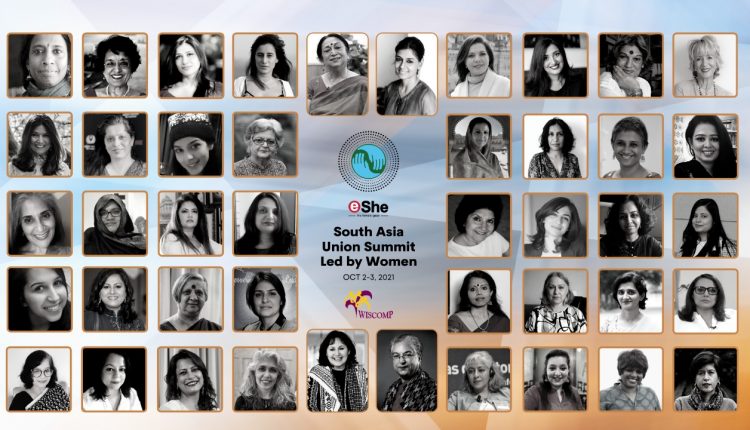 New Delhi : Over 45 World Speakers, all women, including award-winning Indian actor-director Nandita Das and noted British-Afghan journalist Najiba Laima Kasraee will be part of South Asia Union Summit Led by Women to be held on October 2nd and 3rd, 2021.

With all-women panels, the event organised by eShe boasts of a stellar list of historians, economists, academicians, authors, activists, artists, thought leaders, entrepreneurs, lawyers, educationists, and media personalities from 13 countries. The virtual Summit aims to bring together eminent women from around South Asia and the diaspora to discuss solutions for peace, social justice, gender equality and a unified South Asia.

The Summit is timed to coincide with the birth anniversary of Mahatma Gandhi and the UN’s International Day of Non-Violence. It will be broadcast live over social media and will be preceded by a talk by three-time Nobel Peace Prize nominee Dr Scilla Elworthy, who is also one of the advisors for the peace initiative.

The initiative is supported by WISCOMP (Women in Security, Conflict Management and Peace, an initiative of the Foundation for Universal Responsibility), which advocates a humane, democratic and gender-sensitive discourse on peace and security. Collaborators include journalist-filmmaker Beena Sarwar, who founded South Asia Peace Action Network (Sapan) earlier this year, and who will also be speaking at the event.

The 12 panels take up key issues of the time, from the impact of religious extremism on women’s rights, to the urgent need for digital literacy for girls in South Asia. Drawing lessons from the region’s history, scholars such as Rita Manchanda from Delhi, Ravinder Kaur from Copenhagen and Salima Hashmi from Lahore will also discuss how not to repeat the crimes and injustices of the past.

Representation of women in media and pop culture will also be taken up on a panel that includes actor-author Saloni Chopra. Indian actor and casting director Dolly Thakore and Canadian-Pakistani social activist Samra Zafar will share their experiences at a panel on single motherhood in South Asia, which is timely in the context of a West Bengal actor-politician being trolled for having had a child out of wedlock last month.

Other panels like ‘Voice and Vulnerability: Women Activists in Times of Conflict’ and ‘The Burden of Tradition: Gender Equality and Social Justice in South Asia’ shall be discussed keeping in mind the current situations prevailing in Afghanistan, Bangladesh, India, Nepal, Pakistan, and Sri Lanka. Participants include Veena Sikri, former Indian High Commissioner to Bangladesh and convener of the South Asia Women Network; and philanthropist and peace activist Sarita Kumari Sodha, who hails from a Rajput family in Sindh, Pakistan, and is married into the Ghanerao royal family in Rajasthan, India.

Enabling humanistic leaders is also being covered in a session that includes speakers such as actor-producer Vani Tripathi Tikoo, whose outreach programmes focus on encouraging participation of women and youth in politics.

Serving as a platform for women’s leadership for over four years, eShe had earlier organised its Indo-Pak Peace Summit Led by Women in January 2021, which had included talks and discussions by Academy Award-winning filmmakers, renowned authors, humanitarians and feminist activists from India and Pakistan, including Mehreen Jabbar, Sabiha Sumar, Alankrita Shrivastava, Avni Sethi, Sheela Reddy and Moni Mohsin.

eShe has since expanded its scope to include all of South Asia, where traditional social injustices along with continuous political conflict have perpetuated oppression and inequality for large sections of the population.

“Conflict, war and militarisation come at an unimaginable cost – to life, resources, freedom, social justice and the basic principles of humanity. It is women who suffer the consequences of war, violence and extremism the most, and it is time women stepped up to build peace in South Asia using the power of feminine wisdom, the spirit of solidarity, and a vision tinted with empathy,” says Aekta Kapoor, founder of eShe and the nonprofit initiative South Asia Union, which aims to bring together peacebuilders and particularly women from the region to work towards a political and economic South Asian Union, on the lines of the European Union, by 2030.

She adds that South Asia Union Summit Led by Women will now be an annual event to facilitate people-to-people contact across borders, create a safe space for dialogue, and enable courageous conversations on social and political change.