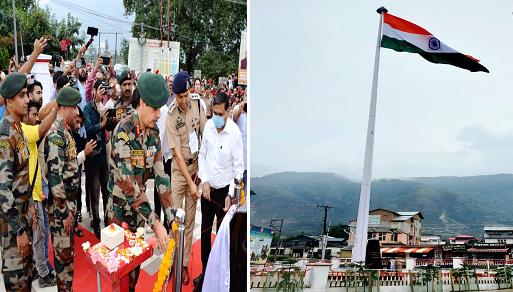 On this occasion, the religious heads of all communities also unveiled the New Martyrs Memorial.

The Martyrs Memorial has been constructed to honour the brave soldiers of Kishtwar who laid down their lives, while fighting terrorism.

The project is the initiative of 17 Rashtriya Rifles (MARATHA LI) to instill pride in our Tiranga amongst the Awaam. The installation of the High Mast was completed in a record time of 40 days and is one of its kind in the Jammu region.

The General Officer appreciated the efforts of Ashok Kumar Sharma, Deputy Commissioner and Shafqat Hussain, SSP Kishtwar for fast-tracking necessary permissions and clearances for the project and all assistance provided to the Army.

Awaam of Kishtwar thanked the District administration and Indian Army for gifting them a monument of National importance.