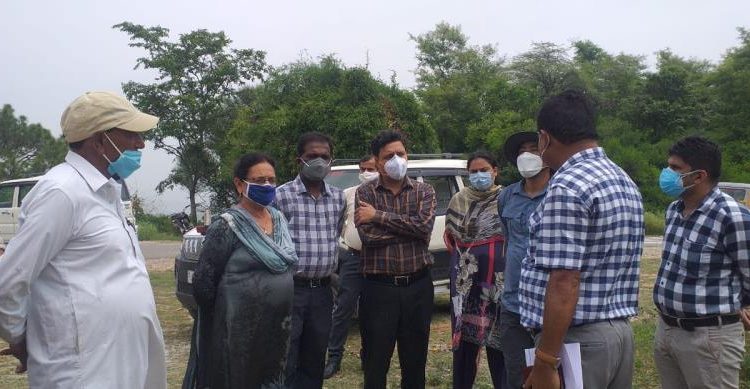 Commissioner Secretary visited the site proposed for development of Biodiversity park in forest compartment 35/D Purmandal adjacent to ancient Shiv Temple being established with a view to conserve the biodiversity of the area, creation of awareness among the visitors and the nature lovers with promotion of biodiversity conservation.

Commissioner Secretary was informed that the Biodiversity park comprising an area of 10 hectare is being established in order to promote and conserve the species of medicinal and religious importance and shall include different vatikas like Tulsi Vatika, Arjuna Vatika,Navgraha Vatika, Amrita ( Aushad Vatika), Ashoka Vatika, Rashi Vatika and Arnla, Trifla Vatikas, which are proposed to be created to bring an aesthetic, healthy and spiritual experience, along with establishment of a Smriti Van.

The measures to be taken for Soil and Water Conservation of catchment area were also discussed in detail with the people of Purmandal.

Commissioner Secretary Forests directed the officers for developing an integrated project for treating the catchment area of Devika river for water recharge, control of soil erosion and other interventions to improve the vegetation of the area with involvement of Forest, Social Forestry, and Soil and Water Conservation departments.

Commissioner Secretary Forests asked the forest department to develop a network of sites with focus on cultural and natural wealth of the region and follow an integrated approach for development of Purmandal and its adjoining areas for providing ecological security to urban Jammu areas.

He also visited the Forest Closure being established under CAMPA at Purmandal and impressed upon the officials to plant more local tree species and fruit plants.

Meanwhile, Commissioner Secretary also visited the Sisal Farm maintained by the Soil and Water Conservation Department at Virpur. He also visited Water Harvesting Structure being constructed at Chatmadana and directed the officials to increase the production of sisa in order to meet the fibre industrial needs.