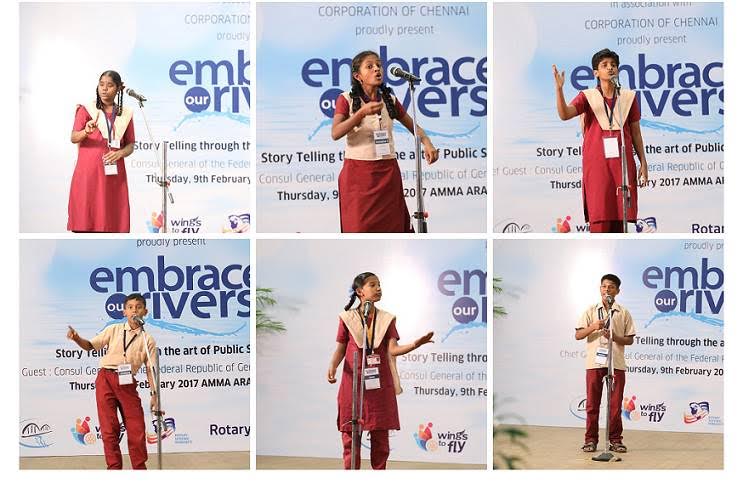 By India Education Diary Bureau Admin Last updated Apr 23, 2020
Share
Chennai: The Rotary Club of Madras East in association with Goethe Institut and Greater Chennai Corporation organized the second edition of “Wings to Fly”- Elocution Competition, exclusively for Corporation School Students of standards 6,7,8,9 and 11. The finals happened on 9th February at Amma Arangam, Anna Nagar. The grand finale witnessed a flurry of activities and rousing speeches for winning the coveted educational trip. Mr. Helmut Schippert, Director, Goethe-Institut, Rtn. K. Ananth, President, Rtn. Sudarsan Ranganathan, Secretary, RCM East, Rtn. Magesh Pattabhiraman, Chairman, Wings to Fly, were present along with other members of RCM East. .
Mr. Achim Fabig, Consul General for the Federal Republic of Germany distributed the prizes to the winning students. Eight Students of Greater Chennai Corporation schools were selected as Winners during the finals, themed “Embrace our Rivers”. The program was also attended by a galaxy of Rotarians, Teachers, Parents & School Students. More than 650 students were part of the event.
Mr Achim Fabig, said, “The kids made outstanding speech with diverse outlook on the prevailing issues of water bodies. We believe this is the right move to bring an ecological awareness rather than educating existing officials. The emotion which they created in the auditorium would have a positive effect in the future when they become the decision makers in the Society.”
Rtn. K. Ananth, President, RCME said “Justifying the title ‘Wings to fly’, the 08 winning students will be taken for a visit to places like Berlin and Munich in Germany where the water management is a way ahead than other nations. He stressed that students from corporation schools are no less competitive compared to other institutions, if they are provided with enough opportunities.
The winners will be flown to Germany in July, on an educational tour, sponsored by Rotary Club of Madras East. They will also be coached in the basics of German language at the Goethe Institut, Chennai for a month, on a scholarship. The competition saw a massive participation of 3000 students during the screening round, out of which 4 students from Senior Category and 4 from Junior category were adjudged winners.
Winners List
Elakiya   – Corporation High School, Budda Street, Korukkupet
Related Posts

Choosing IAS as a career