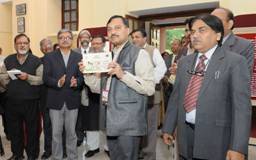 New Delhi: On the occasion of 127th Foundation Day of National Archives of India (NAI), an exhibition entitled “Revolutionary Patriots (1905-1947)” was inaugurated by Shri N.K. Sinha, Secretary, Ministry of Culture in the presence of Shri Raghvendra Singh, Director General of NAI and many dignitaries here today. Addressing on the occasion, Shri N.K. Sinha praised the initiative of NAI and opined that the Digital Technology can make a lot of difference in collection and preservation of historical treasures in NAI. Shri Raghvendra Singh in his address said that the efforts are being made to make NAI more accessible not only for researchers but also for students and others.

Dr. T.C.A. Raghvan, Former High Commissioner of India to Pakistan delivered the Foundation Day Talk on “Foreign Policy and National Archives of India” on the occasion. He dwelt upon many useful aspects of the use of Archives in the Foreign Affairs. The Foundation Day Celebrations concluded with a cultural evening on patriotic poems in the presence of invited audience.

The exhibition on the revolutionary patriots of India is a contribution to a neglected episode in modern Indian history. The focus is on the tactics and political aim of our revolutionary patriots. Their spectacular acts of valour are on display. It is based on original documents and proscribed literature and has been organized with a two-fold objective: to sensitize the younger generation to the sacrifices made by the revolutionaries in their fight for independence from the imperial rule and to inculcate a sense of archival awareness among the public. It will remain open for public till 10 April 2017 from 10.30 a.m. to 5.30 p.m. during working days only.