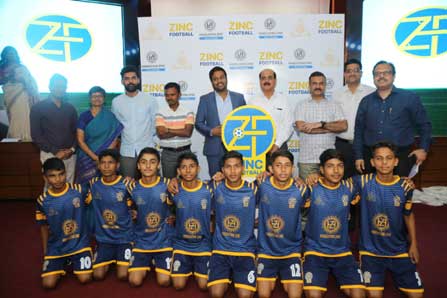 Udaipur: Hindustan Zinc officially launched Project “Zinc Football” today to provide professional football coaching to the rural children of Rajasthan who are in the age group of 5-12 years. Hindustan Zinc has built a world class residential Football Academy at Zawar near Udaipur in Rajasthan with state-of-the-art facilities.

The Zinc Football Academy will also be equipped with 3 FIFA Quality Turf and also a 7v7 size Natural Grass Ground for training and practice equipped with Team Dugouts.

The scouting of Football talent was done by Hindustan Zinc by going in the deep rural areas. 4500 children were scanned and finally 30 children have been shortlisted in the first batch which are fully supported by Hindustan Zinc who have also taken the responsibility of giving scholarships to all the students for their formal education also. Zinc Football intends to train over 2000 passionate boys and girls by fully skilled football trainers through 64 community football centres – Zinc Football Schools, across Rajasthan.

Speaking on the launch, Sunil Duggal, CEO – Hindustan Zinc said, “We at Hindustan Zinc are committed for working towards projects that support the public at large. With the launch of Zinc Football, we wish to establish Rajasthan on Indian football map, and eventually take our country to greater heights in sports. Our vision is to develop 10,000 football players in Rajasthan and in the next 3 years and emerge amongst one of the top 25 positions in football across the world.”

“ I was very excited to see Zawar’s ‘Kumar Mangalam Football Tournament”. I saw thousands of people watching matches with great interest. This is when I thought we should develop a full-fledged football academy and scout young talent and give them world’s latest training and other facilities” Sunil Duggal said.

Annanya Agarwal, President, Vedanta Football said, “Being a footballer myself, I am very passionate about football. India has a lot of talent but very little infrastructure. There is definitely a gap between what we need and what we have. This needs to be bridged. Our aim is to put India firmly on the world footballing map and see India among the top-10 teams in Asia and top-25 in the world within the next five years.”

Vishal Bansal, IG-Udaipur said, “I would like to congratulate all the young talented students of Hindustan Zinc Football Academy. I am pleased to see such latest technology being implemented to train the young talent.” Bishnucharan Mallick, Collector, Udaipur said, “Hindustan Zinc has set a benchmark for other corporates as it is working with a lot of vigor and passion in different spheres. I wish them all the best.”

Hindustan Zinc has partnered with ‘The Football Link’, one of India’s premier football development organizations with professional expertise in organizing large-scale football initiatives for developing grassroots football in the country. The Founder of ‘The Football Link’ – Chetan Mishra spoke about the ecosystem of sports which is very different in India and abroad. He said, “There is a lot of talent observed in Rajasthan with high endurance, fitness level and speed amongst the children. Our dream is to see young talented individuals play in the world cup.”

Hindustan Zinc is India’s only and world’s leading integrated Zinc-Lead-Silver producer. The Company has been associated with sports and has been promoting sportsmen for almost 4 decades when the company made its football stadium at Zawar in Rajasthan in 1976. Since last 40 years, National Football Tournaments are being organized every year at Zawar Stadium. The company has also supported several athletes in the past who have brought numerous laurels for the country in international events.