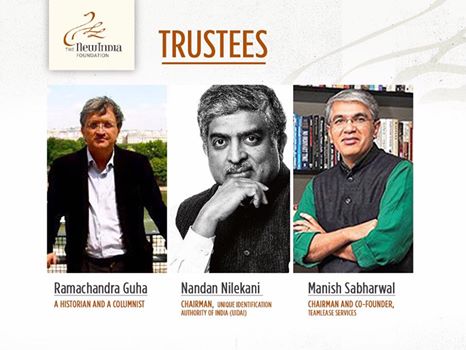 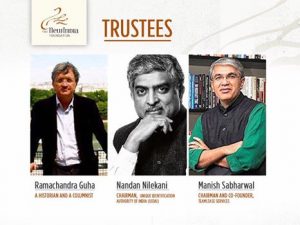 Mumbai: The New India Foundation (NIF) today announced the latest awardees of the New India Fellowship that acknowledges scholars and writers working on different aspects of the history of independent India. Currently in its eighth cycle of awards, the New India Fellowship continues to match public-spirited philanthropy with ground-breaking and relevant scholarship. Among the awardees in this round are a history professor from IIT Guwahati, a Supreme Court lawyer, an ecologist, a pioneering publisher, and some renowned journalists – each of whom were selected through a rigorous three-tier selection process.

The New India Fellowship was started in 2004 to help enliven India’s minimally documented, yet incredibly rich, post-independence history. The fellowships are awarded for a period of one year and carry a stipend of INR 1,00,000 a month. By the end of the year, Fellowship holders are expected to publish original works that are an extension of their winning proposals. Sixteen titles have been published under the NIF aegis, many of which have gone on to become seminal and award-winning works on contemporary Indian history.

Congratulating the newest batch of Fellows, Dr Ramachandra Guha, Managing Trustee, The New India Foundation, said “It is incredibly important for us to document India’s history since independence. This history traverses the complex and contested terrains of culture, caste, religion, politics and more; yet there are not enough systematic historical and biographical studies beyond the attainment of independence. The New India Foundation endeavours to bridge that gap and inspire the next generation of social scientists and writers. The Fellows this year comprise a talented mix of individuals and we are honoured to offer them the New India Fellowships”.

The nine awardees of The New India Fellowship 2017 are:

Arupjyoti Saikia, Professor in History, Department of Humanities and Social Sciences, Indian Institute of Technology, Guwahati, for his proposal, ‘Assam: A History Since Partition’. Saikia has been awarded the Srikant Dutta Award 2015 for his work, ‘A Century of Protests: Peasant Politics of Assam since 1900’ and the Joint Research Grant for ‘Indo-China Corridor’ from the Swedish Research Council, 2016-2019. A graduate in Agrarian Studies from Yale University, Arupjyoti Saikia has authored several journals and research papers on Assamese history, a research interest he will further through the Fellowship.

Manoj Mitta, for his proposal, ‘Untouchable India: The Emancipation of Dalits and a Bloody Pushback’. Mitta, a respected former Senior Editor at The Times of India, currently works as an independent author focusing on questions of law, human rights, social justice, public policy and civil violence. An LLB graduate from Osmania University, Mitta has authored several books in addition to serving as a member on the advisory board for Amnesty India International, Bengaluru and as President of the Foundation for Media Professionals, New Delhi. In the tenure of his Fellowship, Mitta shall explore a key paradox in the history of the Republic, whereby the legal abolition of untouchability in 1950 has not stopped massacres of Dalits across India, these violent crimes being followed by the wholesale acquittals of those accused of committing them.

Nachiket Kelkar, for his proposal, ‘Dark Reflections: Field Notes on People and Ecology in Bihar’s Gangetic floodplains’. A doctoral student at the Ashoka Trust for Research in Ecology and Environment, Kelkar has authored several journal articles and book chapters on aquatic ecology, river ecosystems and hydrology, resource conflicts, environmental history, and biodiversity conservation. Through the New India Fellowship, Kelkar hopes to further his and our understanding of the interplay of hydrological and ecological processes with institutional conflicts in the riverine fisheries of the Gangetic floodplains.

Gautam Bhatia, Advocate, Chambers of C.U. Singh, Senior Counsel, Supreme Court of India, for his proposal, ‘The Transformative Constitution’. An alumnus of Yale Law School, University of Oxford and National Law School of India University, Bhatia has also been recognised as the Rhodes Scholar (India) in 2011 and granted the Herbert Hart Prize for Jurisprudence and Political Theory Examination. Bhatia hopes to use the Fellowship to envision the Constitution as a transformative political text, drawing upon legal theory, key Supreme and High Court cases, and political history.

Abhishek Choudhary, for his proposal, ‘Believer’s Dilemma: A Life of Atal Behari Vajpayee’. A graduate of the Madras School of Economics, Chennai, Choudhary has juggled roles between research and journalism – serving as a research associate for ASER Centre (Pratham) and as a freelance journalist in Delhi. Choudhary hopes to use the Fellowship to write a major and thoroughly researched biography of Atal Behari Vajpayee, considered by some scholars as the most glamourised yet most enigmatic Indian Politician alive.

Nazia Akhtar, for her proposal, ‘Hyderabadi Women: Representations and Representative Politics in Urdu Literature’. A Comparative Literature Ph D from the University of Western Ontario, Akhtar has taught Literature and Gender Studies at the University of Hyderabad, Tata Institute of Social Sciences Hyderabad and University of Western Ontario. Akhtar is interested in literary and historical texts in the context of the Integration of Hyderabad; women’s writings and politics; and representations of gender, religion, and nation in television and cinema. For her New India Fellowship, Akhtar plans to analyse the work and influence of four remarkable Urdu women writers from Hyderabad.

Kanato Chophy, for his proposal, ‘Children of the Great Awakening: A Memoir of the Naga Baptists’. A former faculty member of the Central University of Jharkhand, Chophy has authored several book chapters and research papers focus on tribes, religion and culture within Nagaland. Chophy was also awarded the ICMR Fellowship in Social Sciences in 2009. With the Fellowship, Chophy hopes to delve deeper into the significantly large Baptist population in Nagaland, a state of the Republic where faith plays a critical role in social, political and cultural life.

S. Anand, Founder, Navayana Publishing Pvt. Ltd., New Delhi, for his proposal, ‘Babasaheb: The Many Lives of Bhimrao Ramji Ambedkar’. Previously a journalist with leading mainline newspapers, Anand left his job as a journalist to establish Navayana – a publishing house that focuses on caste-related issues. He has also co-authored and curated Bhimayana, an award-winning graphic biography of Ambedkar. Anand hopes to use the Fellowship to rigorously investigate the life and after-life of B. R. Ambedkar, the lawyer-scholar-statesman whose imprint on our modern history has been definitive.

Neha Dixit, for her proposal, ‘Half Citizens: The Invisible Women of the Indian Economy’. Dixit has previously worked as a journalist for Al Jazeera, The New York Times, Caravan, and other publications. Her past awards include the Kurt Schork Award for International Journalism (2014) and Thomson Reuters Foundation’s Trust Women Honorary Journalist of the Year (2013). Through the Fellowship, Dixit shall analyse the lives and struggles of women in the informal sector across India.