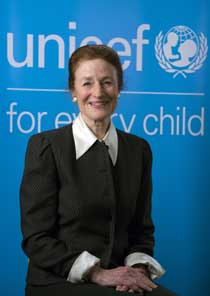 University of Leeds: Academic seeks to ‘open physics to the…

University of Leeds: Leeds wins funding to open up…

New Delhi: UNICEF Executive Director Henrietta Fore will visit India from 30 September to 6 October 2018 to see first-hand UNICEF supported programmes related to sanitation, health and other children’s issues, discuss future workforce skills development for young people, and explore partnership models with business leaders.
During her first official visit to the country as UNICEF Executive Director, Fore will be meeting with senior government officials, frontline workers, families, children and young people. Her itinerary also includes meetings with business leaders to seek shared value partnerships with the heads of top corporate houses in the country on the business benefits of investing in children.
“There is no longer debate about the key role of business in building a safer, more sustainable world for children,” Fore said. “There is strong financial evidence that investments in children reap benefits not just for the families and communities benefitting, but also for the governments and corporate partners advancing the cause of children and young people. Doing good is doing good business.”
On 1 October, she will deliver keynote remarks at the Mahatma Gandhi International Sanitation Convention (MGISC), a 4-day event in New Delhi that will bring together Sanitation Ministers and sector specialists from around the world.
Organized by the Indian Ministry of Drinking Water and Sanitation, the meeting will share sanitation and hygiene success stories and lessons from the participating countries. The event will culminate on 2 October with the launch of Mahatma Gandhi’s 150th birth year celebrations in India, as the Swachh Bharat Mission (Clean India Programme) enters its final year of implementation.
“In the last decade, South Asia has taken remarkable strides in improving access to sanitation and hygiene facilities, with the proportion of people practicing open defecation down to only 34 per cent in the region as a whole” Fore said. “This progress is proof we can get to the goal of sanitation for all, if we all regroup, refocus and rededicate ourselves to this critical 2030 benchmark.”
Fore will also interact with young people and focus on some of the innovative solutions that support young people’s access to education and skills training for future work.
“Targeted investments in education, skills and economic opportunities for young people hold the potential to radically transform a country’s economic outlook,” said Fore. “Key stakeholders across sectors must work together to scale-up efforts to strengthen ‘school-to-work’ transitions, including exploring new opportunities to train young people through hands-on mentorships and apprenticeships.”
As part of her India visit, Executive Director Fore will travel to Mumbai to attend a ‘Closing Bell’ event at the National Stock Exchange. The programme will emphasize the urgent need for equitable investments in children – one of the best and most valuable long-term investments governments and businesses can make.
Note to Editors
Ms. Fore, who became the seventh Executive director of the United Nations Children’s Fund on 1 January 2018, is known for her work in economic development, education, health, humanitarian assistance and disaster relief in public service, private sector and non-profit leadership.
In a career that spans more than four decades, Ms. Fore served as the Administrator of the U.S. Agency for International Development (USAID) and Director of United States Foreign Assistance from 2007 to 2009. In 2009, she received the Distinguished Service Award, the highest award the Secretary of State of the USA can bestow.
From 2005 to 2007, she served as Under Secretary of State for Management, the Chief Operating Officer for the U.S. Department of State.

University of Leeds: Leeds team to study impact of cannabis-based drug on most lethal…