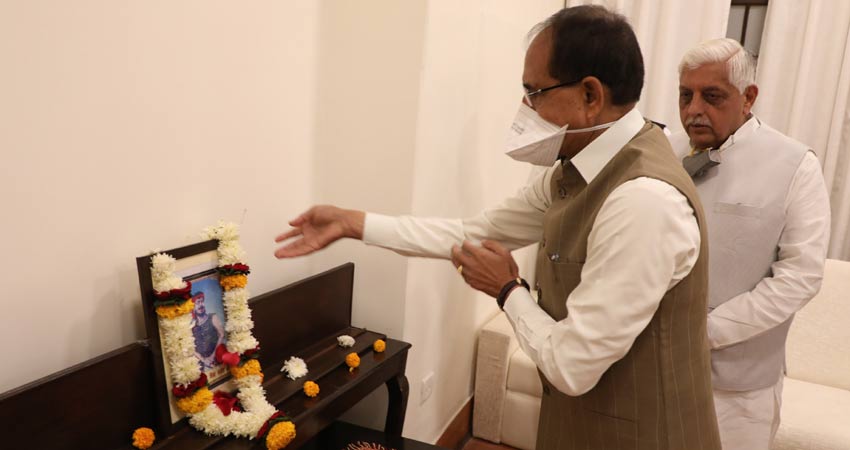 Martyr Bhima Nayak’s sacrifice will continue to inspire to be dedicated to the nation: Chief Minister Chouhan

Bhopal : Chief Minister Shri Shivraj Singh Chouhan has said that the Balidan Divas of martyr Bhima Nayak is a proud day for Madhya Pradesh and Nimar. On this day, the immortal martyr Bhima Nayak sacrificed his life for Mother India to cut the shackles of slavery. His sacrifice will always inspire to be devoted to the nation.

Chief Minister Shri Chouhan was addressing the anniversary function on the Balidan Divas of martyr Bhima Nayak at Bhima Nayak Prerna Kendra at Dhaba Bawdi village in Barwani district through a video message. A huge fair was also organized on this occasion.

Chief Minister Shri Chouhan said in his message that many warriors and heroes sacrificed their lives for the freedom of the country. We did not get this freedom served on a silver platter. Thousands of people gave up their youth and lives for Mother India. One such heroic son, martyr Bhima Nayak, fought against the British in the First War of Independence in 1857. The British used to tremble by the name of Bhima Nayak. His area of ​​work spread from Barwani to Khandesh in Maharashtra. His army consisted of 10 thousand fighters. He confronted the English guns with the bow and arrow. He would loot the treasury of the British and distribute it among the poor people. Hence he was called Robin Hood of Nimar. Such a brave warrior was born in a tribal community. He was a great patriot. He was given many temptations but he considered India’s independence to be paramount. He was caught fraudulently due to traitors. Bhima Nayak was sentenced to kala pani (cellular jail) after his arrest. He was kept in Port Blair of Andaman Nicobar where he was subjected to torture. He was martyred on December 29, 1876 in Port Blair. I bow down at his feet. I am happy that a memorial has been built in Dhaba Bawdi in his memory. The tradition of organizing a fair on his martyrdom day has been started. The country is indebted to his sacrifice. Work should be done for the country and society by taking inspiration from him. This is our tribute to him.

Chief Minister Shri Chouhan said that veterans say martyr Bhima Nayak resided in village Palasiya Sajwah, in the middle of small hills, about 5 km from Anjad. He used to stay in a cave in a round Bayadi and fight against the British. People say that there is also a tunnel inside the Goal Bayadi, which originates in the stepwell of a nearby field. The road leading to Gol Bayadi has been closed with stones. The Department of Archaeology will make efforts to preserve the precious heritage of martyr Bhima Nayak in Gol Bayadi and Dhaba Bawdi and make information related to him public. The Department of Archaeology will properly conserve and promote Gol Bayadi and will make efforts to further develop the memorial of martyr Bhima Nayak. A huge fair will be held every year on the Martyrdom Day at Dhaba Bawdi.