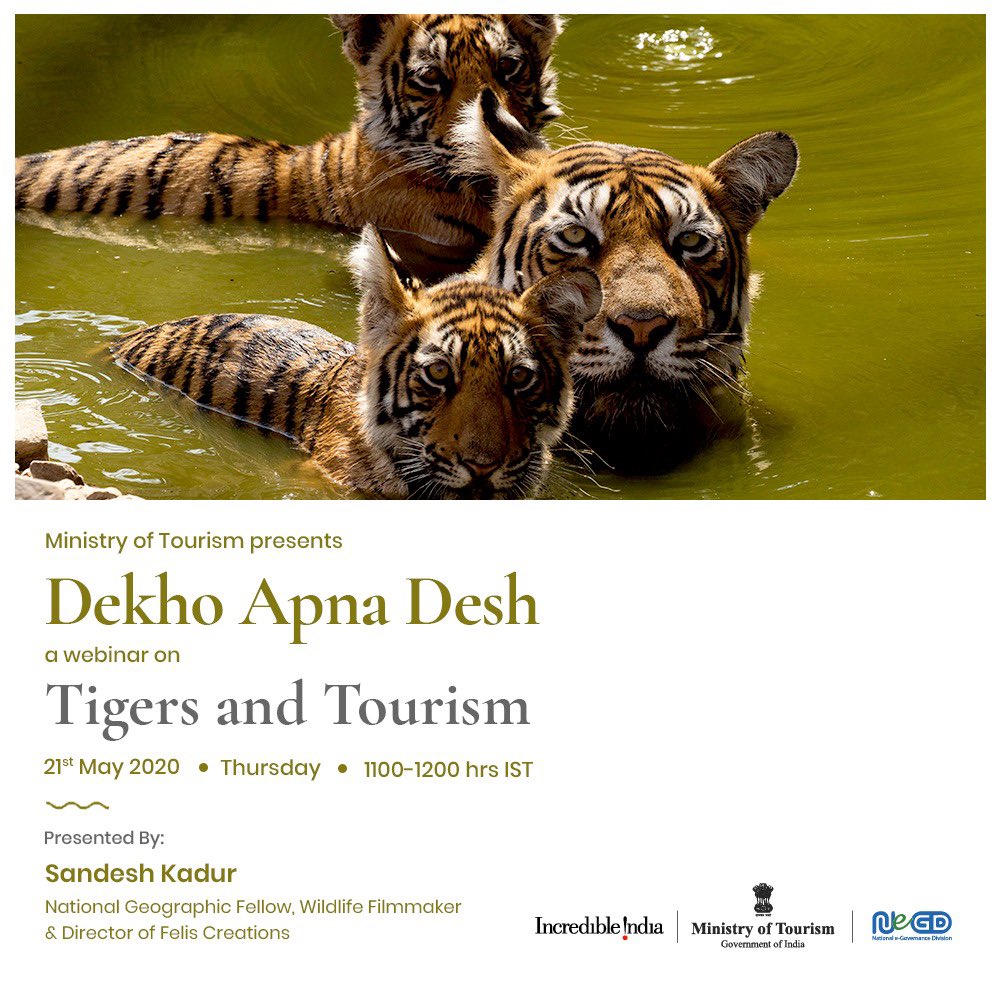 New Delhi: The Ministry of Tourism organised its latest webinar on ‘Tigers and Tourism’ under Dekho Apna Desh Webinar Series on 21st May 2020. The webinar was all about unveiling the rich heritage of tiger habitation in India and its relevance with tourism in India.

The session was moderated by Ms. Rupinder Brar, Addl. Director General, Ministry of Tourism and presented by Mr. Sandesh Kadur, an eminent wildlife conservation photographer and filmmaker, National Geographic Fellow, winner of BAFTA in photography and an EMMY nominee for outstanding cinematography.

Sitting amidst picturesque forest of Agumbe, Mr. Sandesh started his hour long talk on Tigers and Tourism with a time travel back during his teens when he would read books by the famous British hunter Jim Corbett and eventually got inspired to document the wild big cats for a living. Almost 8 years ago, he travelled across India to document a video on Tigers and Tourism which brought him into understanding how Indian tourism is highly influenced by the large population of these mighty striped creatures.

However, the fascination for tigers by humankind, Sandesh mentioned, has existed since millennia. The intrinsic connection has been successfully seen through south western communities of India who represent their reverence for tigers by painting themselves in tiger stripes walking from temple to temple and village to village. Huli Vesha or Pili Yesais a folk dance famous in coastal Karnataka performed during Navratri to honour the Goddess Durga whose favoured animal is the tiger.

Filmmaker of the documentary Wild Cats of India, Sandesh Kadur stressed on how being a responsible tourist and practising co-existence will go a long way in protecting the lives of these enormous cats. India’s astounding diversity in wildlife draws people to visit the country in large numbers and such crowding may be a threat to the animals, tigers in general, if sustainability is not made the focal point.

The Dekho Apna Desh Webinar series, launched on 14th April 2020, till date has conducted 22 sessions showcasing the varied tourism products and experiences that India offers across the country. This series has attracted a viewership of over 90,000persons till date.

The National e-Governance Division (NeGD) created by the Ministry of Electronics & Information Technology (MeitY) has been playing a pivotal role in supporting the Ministry in conducting of the DekhoApna Desh Webinars by providing technical assistance directly with a professional team .