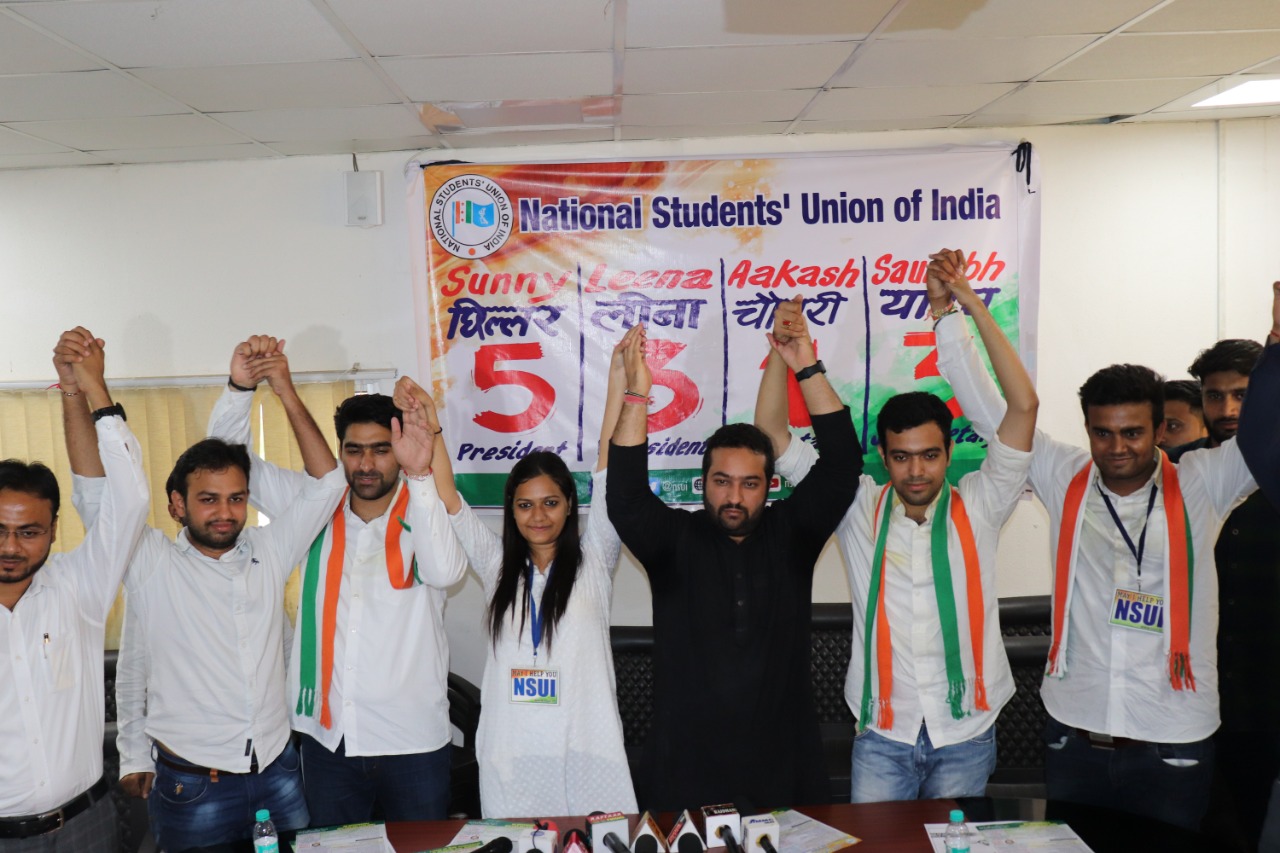 New Delhi : In the upcoming Delhi University Students’ Union Elections, NSUI is coming up with new aspects and new insights. This time four hard-working and dedicated candidates are all set to contest the elections. This year NSUI has given ticket to Sunny Chillar for President, Leena for Vice President, Akash Chaudhary for Secretary and Saurabh Yadav for Joint Secretary.
Sunny Chillar is pursuing B.A. (Hons.) Sanskrit from Shivaji College. He is also an epitome of excellent sportsmanship and also a National Level Basketball Player. His main motive is to empower women, to raise voice for the construction of hostels for all students on vacant land in DU. According to Sunny, if he wins the elections he will initiate for the establishment of Chhatra canteen which will provide complete meal thali to students in just Rs. 10.
Our Vice President candidate Leena completed her graduation in B.SC Chemistry (hons.) from Miranda House College. She is presently pursuing M.A in Budhhist Studies from Delhi University. Besides being a good student leader Leena has also contributed in the Scout and Guide programme. Considering Baba Saheb Ambedkar as her ideal, Leena will work for the Upliftment of women, women security, social unity and education, upliftment and security of the scheduled caste and other backward sections of society.
Akash Choudhary is the NSUI candidate for the post of Secretary. He has been the College President of Sri Aurobindo College Students’ Union. He was a district level swimmer and has been constantly fighting for students’ rights. He is currently pursuing his study of Law from Campus law Centre, Delhi University. He believes that if given a chance, he would always be ready for the students of the university in every condition.
Saurabh Yadav, being the candidate for Joint secretary, is a student of B.A (Sanskrit) from Motilal Nehru College. He is an Active sportsperson and a state level Shotput player. He has been a fighting for rights of the students since a long time. One of his main aim is to ensure increase in diet rates for sports loving students of Delhi University. He had been on the post of State General Secretary of NSUI in the past.
NSUI National President Fairoz Khan said, “This time NSUI is stepping in the battle Ground of DU For Big Initiatives like 10 Rs ki Thali, Women safety & Tag of Institute of Eminence for DU. He further said that the history would again repeat itself and Ballot no 5,3,1,3 of NSUI would give a Clean sweep to all others in Delhi University.”