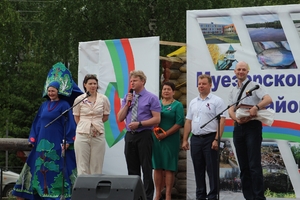 At the invitation of the Administration of the Muezersky municipal district, a delegation from PetrSU visited the village of Muezersky on the occasion of the 55th anniversary of its foundation.
The delegation included: D.I. Balashov, Director of the Physico-Technical Institute of PetrSU; A.V. Solovyov, Associate Professor of the Department of Information-Measuring Systems and Physical Electronics of the Physico-Technical Institute of PetrSU; E.Yu. Guseva, director of the PetrSU Interdistrict Resource Center in Kostomuksha.

E.Yu. Guseva thanked the district administration for help and assistance in the implementation of PetrSU activities within the framework of the flagship university development program, noted the active participation of educational institutions in PetrSU events and expressed hope for continued fruitful cooperation.

Head of the Administration of the Muezersky municipal district A.V. Pashuk thanked PetrSU for the congratulations and expressed hope for the continuation of large and fruitful cooperation.