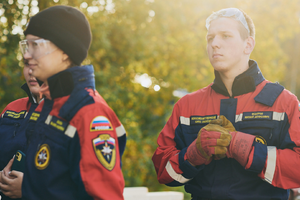 The 1st All-Russian gathering of rescue students and volunteers in the Emergency Situations named after Hero of Russia Yevgeny Zinichev ended in the Moscow Region.
More than 500 volunteer rescuers from all over Russia took part in the rally, including students of PetrSU – members of the Karelian regional branch of the All-Russian student rescue corps.

On the basis of the Noginsk Rescue Center of the EMERCOM of Russia, the 1st All-Russian Meeting of Rescue Students and Volunteers in Emergencies (ES) named after Hero of Russia Yevgeny Zinichev ended, its culmination was a demonstration exercise dedicated to Civil Defense Day.

The participants of the rally and exercises were students of higher educational institutions of the Ministry of Emergency Situations of Russia, volunteers, heads of student rescue teams of the VSKS, volunteers of partner non-profit organizations. The staff of the Ministry of Emergency Situations provided methodological assistance in the preparation of the event and provided the event with communications and electricity.

The Republic of Karelia was represented at the rally by students of the rescue team “Bastion” of the Karelian regional branch of the All-Russian student rescue corps.

The program included both a theoretical educational block, including dialogues on an equal footing and intellectual games, and a practical part. The organizers paid special attention to the practice – during the week, the participants practiced the skills of search and rescue operations in the natural environment, honed the actions of rescue operations in emergency situations, including an accident at an enterprise with the release of a chemically hazardous substance, provided first aid in case of damage of all kinds, carried out emergency rescue operations in the water area, emergency reconnaissance, search operations at rubble and in the forest, and much more.

The Karelian Regional Branch of the All-Russian Student Rescue Corps expresses its deep gratitude to Olga Yuryevna Koroleva, the head of the sports club of PetrSU, as well as to the entire leadership of Petrozavodsk State University for the financial support and assistance in organizing a trip to the I All-Russian rally of students of rescuers and volunteers in emergency situations in Noginsk ,

– noted the organizers of the event.

In the winners of the competition “Forest All-Around – 2021”