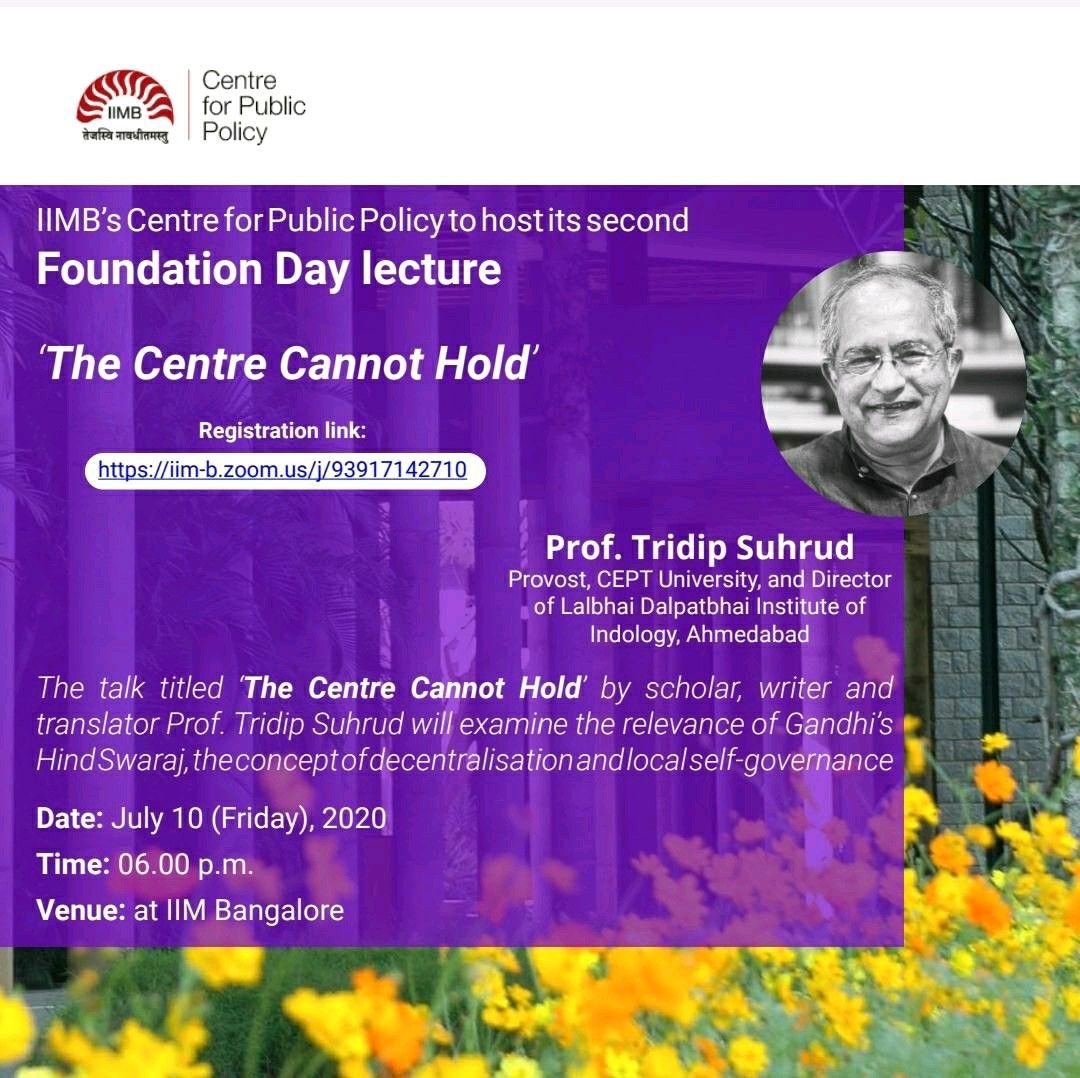 Read Gandhi’s Hind Swaraj to challenge the two entities that govern our lives – the modern state and the modern corporation”: Tridip Suhrud

Bangalore: In his 45-minute lecture, this evening, titled, ‘The Centre Cannot Hold’, Professor Tridip Suhrud, scholar, writer and translator who works on the intellectual and cultural history of modern Gujarat and the Gandhian intellectual tradition, described the relevance of Gandhi’s Hind Swaraj, the concept of decentralisation and local self-governance and examined its relevance in the current context.

Quoting the poet W.B. Yeats in ‘The Second Coming’ (‘Things Fall Apart/ The Centre Cannot Hold/ Mere anarchy is loosed upon the world/…The Ceremony of Innocence is Drowned’…) Prof. Suhrud, who is Provost of CEPT University and Director of Lalbhai Dalpatbhai Institute of Indology, Ahmedabad, said one should suspend the great temptation to centre oneself in the modern world. “I begin with a plea of innocence in order to read the 20-chapter Hind Swaraj written by Gandhi in 1909.”

“Gandhi’s major associates – friends as well as critics – looked upon Hind Swaraj as a folly. Savarkar thought it obscurantist, Nehru forgot it. No one thought it worthy of engagement in Gandhi’s lifetime. The only one who engaged with it was a bureaucrat who was an Oriental translator. He called it a ‘dangerous text’ because ‘it posed a cultural threat’ and called for its ban. Gandhi, ever the lawyer, dictated a paraphrase in English. Hind Swaraj is the only text he chose to translate himself,” explained Prof. Suhrud.

Pointing out that when in 1938, a theosophical journal, The Aryan Path, printed the text and the responses, not one Indian was in the list of responders, he said it was only in the aftermath of the Emergency (1975) that Indians looked at it with seriousness. Answering the question on why the text was so difficult to engage with, he said it wasn’t the language or the politics of it, but the fact that it was deeply troubling while being alluring which made it hard to engage with. “Hind Swaraj had all the markers of being written aboard a ship – there is liquidity to it – the prose varies, it is almost vernacular. The unsteady and therefore unfinished movement of the arguments in it has also made it difficult to read,” he explained.

Prof. Suhrud pointed out that the Hind Swaraj makes two assumptions – it is possible to conceive of life and civilization with all its complexities outside the rubric of modernity; and yet the text (and Gandhi) has all the traces of modernity. It is written to be printed – printing being an act of modernity.

“In Hind Swaraj, Gandhi spoke of modernity as ephemeral – a transient phenomenon. This made some read this text as anti-modern and this explains their unease with the text. But, Gandhi was aware of modernity – of the flows of capital, of the role of the Empire and the colonies, of the role of migrant labour.”

Describing the ecological reading of the text in the last 25 years ago as most powerful, he said Hind Swaraj, along with Joseph Kumarappa’s ‘Economy of Permanence’, speaks of limits to exploitation and recognizes the structural nature of poverty and violence, making it relevant in the current context.

In the text, Gandhi feels that it is possible to consider the value of human worth in non-human terms – which means, machines and objects become the measure of human worth. “What we need to strive for lies outside of us. This alters the way a society constitutes itself.”

Prof. Suhrud argued that for Gandhi and for all seekers after truth before him and after him, primacy of the individual could not be negated completely. “In Hind Swaraj, Gandhi takes the individual from the spiritual realm and places him in the political realm. All the action required to be performed is by the individual as an autonomous political subject. He believed that such an individual is capable of self-governance.”

Prof. Suhrud’s lecture marked the Foundation Day of the Centre for Public Policy at IIMB.

“The Centre, created in 2000, has evolved into a leading policy think tank engaged in cutting-edge research, teaching, training and capacity building. It works on improving development outcomes across the country and has pioneered the application of management disciplines for delivery of better public services and governance,” explained the CPP Chairperson Prof. M.S. Sriram, offering an overview of the Centre.