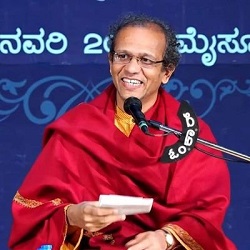 Gandhinagar: Bringing one more illustrious scholar of Indian arts and aesthetics, the fifth edition of the Indian Knowledge Systems (IKS) elective course at Indian Institute of Technology Gandhinagar (IITGN) hosts two lectures and an interactive session with the renowned Sanskrit scholar and Shatavadhani Dr R Ganesh next week. Dr Ganesh will deliver two lectures on ‘Introduction to Indian Poetics’ on February 15 and 17, followed by an interactive session on February 18, 2021, from 3:05 to 4 pm (IST).

Shatavadhani Dr R Ganesh is one of India’s foremost Sanskrit poets and scholars. He writes and lectures extensively on subjects pertaining to India and Indian cultural heritage. He is a master of the ancient art of Avadhanam, where he faces a group of eight (in Ashtavadhanam) or hundred (in Shatavadhanam) questioners, and in response to their many queries, composes extempore poems set to metre, solves poetic challenges, solves a magic square, keeps track of the count of a randomly rung bell, and so on. He has performed more than 1,200 Ashtavadhanams and five Shatavadhanams thus far. He is fluent in Sanskrit, Pali, Prakrit, Kannada, Telugu, Tamil, Hindi, Greek, Latin, and Italian. He is also well versed in the Vedas, Vedangas, Upanishads, and Dharmashastra literature, classical texts on the arts such as Natyashastra, and literature in classical Sanskrit. Dr Ganesh holds a bachelor’s degree in Mechanical Engineering and master’s degree in Metallurgy as well as in Sanskrit. He is recipient of several awards and recognitions including the Badarayana-Vyasa Puraskar from the President of India for his contribution to the Sanskrit language.

In his lectures, Dr Ganesh will focus on Indian poetics and aesthetics, including how Indian thinkers developed a theory that elegantly explains the experience of beauty in all aspects of nature and culture in literature, and why rasa-dhvani-auchitya-vakrata quartet is relevant to all arts. The Indian literary theory is applicable to all genres of literature — ranging from the classical to folk, from ancient poems to modern novels — in all regional languages.

Dr Ganesh will also elaborate on different forms of aesthetic experience (rasa) that make us feel pure emotions; how suggestion (dhvani) helps in recreating the emotional picture produced by the poet; how propriety (auchitya) marks a suitable context within which a recreation is enjoyable; and finally, how the poet uses words and meanings in a well-turned way (vakra-vidhi) to release them from the shackles of worldly utility. He will demonstrate the employability of these concepts to the appreciation of world literature by drawing from the treatises of masters such as Bharata, Anandavardhana, Abhinavagupta, and Kuntaka.