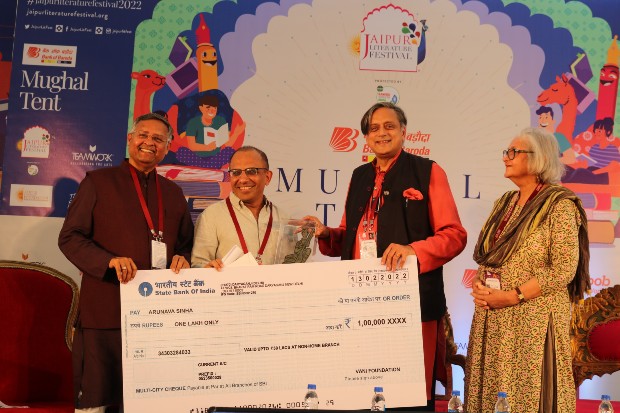 Vani Foundation and Teamwork Arts presented the Vani Foundation Distinguished Translator Award at the prestigious Jaipur BookMark. The award honors those translators of Indian nationality who have consistently and qualitatively facilitated literary and linguistic exchange between at least two Indian or international languages. This award was deemed necessary in light of the lack of present initiatives to encourage direct exchange between Indian and international languages. The award especially favours translators who have produced a significant literary corpus over an extended period of time, and carries a monetary prize of one lakh Indian rupees (incl. taxes as per government guidelines), in addition to the trophy and testimonial letter. The award is in its 6th edition in 2022.

The Journey so far:

Presenting the 6th Vani Foundation Distinguished Translator Award, Dr. Shashi Tharoor said that it is essential for any literary work to be translated and have a good translation so that it can reach the readers in more than one language. In such a situation, there is a cultural responsibility on the translator because the translator is building a cultural bridge between more than one language.

Namita Gokhale, founder and Co-Director of Jaipur Literature Festival and jury of the award said, “There is so much to be done, in the field of literary translation in the subcontinent, and I know that Arunava Sinha’s nuanced transmutations will bring the many languages and one literature of India into a new level of perception and self awareness.”

On this occasion, the cultural critic and author Sundeep Bhutoria said – “It is a proud privilege to be part of the jury for the Vani Foundation Distinguished Translator Award 2022 as they consistently work with promoting Indian languages and honour those translators who facilitated literary and linguistic exchange between Indian languages. Arunava Sinha, this year’s awardee has translated classic, modern and contemporary Bengali fiction and nonfiction into English and by doing so has forged a link between languages and culture. As someone who also works in promoting Indian languages, we believe in Apni Bhasha Apne Log which also happens to be the tagline of our Foundation that celebrates the confluence of India’s diverse languages, literature and Culture.”

Neeta Gupta, Publishing Consultant, Indian Languages, said- “The word prolific falls short when you are speaking of a translator with Arunava Sinha’s oeuvre. I cannot think of another person who has single-handedly contributed as much to the world of literary translation as he has.”