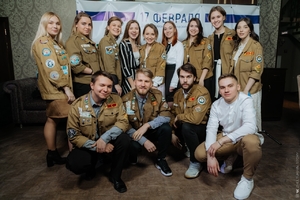 Today is the Day of Russian student brigades

The history of student teams in Karelia began in 1966, when a headquarters was created on the basis of Petrozavodsk State University.
The first detachments appeared, as in the whole country they were MTR. The participants traveled to the regions of the republic and were engaged in the construction of industrial and residential buildings, railways. Now the Karelian organization “Russian student detachments” accommodates 196 fighters, which make up 4 directions: pedagogical, construction, medical and guides.

2020 was not so difficult for everyone, but definitely unusual. Student teams are no exception. Nevertheless, in 2020 we managed to do a lot: detachments of all directions left for the working season, two interregional labor projects were organized, the training of our counselors was rebuilt and brought online, and the 8th meeting of student teams of the Northwestern Federal District was properly held!

– said the vice-rector for educational and social work of PetrSU Vasily Kuzmich Katarov.

Among the significant projects is the Onega landing. For three years, 7 detachments of the Onega landing force were created, and the number of applications for participation in the action in 2021 was a record for all time. And how much kindness and good emotions the fighters take to the regions of Karelia every year is impossible to calculate! Activists help older people in remote villages of Karelia with household chores and spend holidays in local houses of culture.

The first is SMMO “Mir”. 22 fighters from the Republic of Karelia, Veliky Novgorod and Orenburg spent their working season in Petrozavodsk, working on the basis of the Emergency Hospital and the Republican Perinatal Center.

The second is ZSPO “Karelia”. Since 2015, most of the Karelian fighters have been working as part of a zonal project in one of the camps in the Krasnodar Territory. In 2018 and 2019, the fighters worked in the “Pearl of Russia” camp. After that, the idea came up to spend the 2020 labor season also as part of a zonal project in the same camp. After participating in the rally of the Northwestern Federal District last year, a student of PetrSU Lyubov Khoroshko also had an idea to invite fighters from other regions to our zonal project. Thus, in 2020 ZSPO “Karelia”, consisting of fighters from 3 regions, took place.

Also, every year activists hold educational, creative, sports and corporate events. Some of them are: School of Young Fighter, School of Professional Skills, Spartakiad, Creative Festival, Miss Student Units of Karelia contest, and, of course, the traditional gathering of student squads of Karelia.

Presentation of the information system “Linguistics”