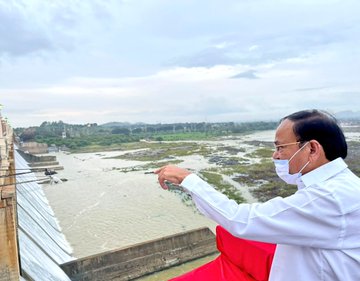 New Delhi: Vice President, Shri M. Venkaiah Naidu today stressed the need to educate people about the ecological importance of rivers and water bodies, and urged the people not to pollute or degrade them.

In a Facebook post, after visiting Tungabhadra dam at Hospete in Ballari district of Karnataka, the Vice President underlined the need to preserve and conserve our finite water resources for future generations. “A river is very much like a living entity and let us pledge to keep its purity and sanctity intact”, he said.

Retreating the need to provide irrigation facilities to all farmers, Shri Naidu said that as a farmer’s son, he understands the importance of water for agriculture.

Referring to Tungabhadra Dam and it’s natural surroundings, Shri Naidu said that he was overwhelmed by the magnificence and vastness of nature’s ‘virat swaroop’.

Underlining the significant role played by Tungabhadra Multipurpose Project in the development of the region, he said that by irrigating vast farmlands, generating power and driving tourism, it is serving the nation in multiple ways.

Recalling the history of dam, the Vice President wrote that, though, the initial idea of constructing the dam was conceived in 1860s to provide irrigation facilities to the famine-prone Rayalaseema region,  it was only in 1944 that the Governments of Madras and Hyderabad arrived at a final decision to jointly implement the project. The visionary engineer, Mokshagundam Visvesvaraya played a key role in deciding the design and construction methods of the dam.

The Vice President who arrived here from Bengaluru today, was briefed on various aspects of the Tungabhadra multipurpose project. Tomorrow, he will be visiting Hampi, the UNESCO World Heritage Site which is a few kms away from the dam.

The Vice President said that Hampi and the Tungabhadra Dam should be high on the list of places of visit by students of schools and colleges. “These twin sites are must-visit destinations for anyone who wishes to experience the joys of nature,” he said.

Nickelodeon is back with its Surakshabandhan Campaign; Gives A Heart-Warming Tribute to Medical Personnel at Wockhardt Hospital, SoBo