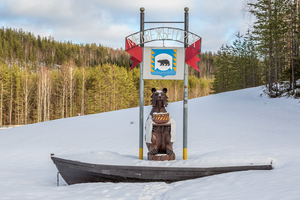 Workshop of words in Medvezhyegorsk

Director of the Interdistrict Resource Center of PetrSU in Segezha Elena Yurievna Guseva, Head of the Department of the Scientific Library of PetrSU Natalia Rostislavovna Trubina addressed the participants with a welcoming speech.

Svetlana Olegovna Zakharchenko spoke with a story about her family, to which the book of prose “Zamkadye in Zaonezhski” is dedicated. There was also a song about Medvezhyegorsk on verses by S. Zakharchenko.

N.R. Trubina spoke with information about the activities of the Scientific Library of PetrSU, told about various events and competitions held by the library. She invited schoolchildren to participate in PetrSU events, as well as to join the ranks of university students.

The event lasted for several hours. Students of Medvezhyegorsk secondary school named after A. Fanyagina Konstantin Sorokin, Angelina Kozlova, Nikita Alekseev, Natalya Dub, Diana Rungis, Ksenia Gulyak read the poems of their favorite poets. Poems flowed like a song. And I didn’t want to part. The cozy atmosphere of the meeting promoted creative communication and left a good impression,

Bannova Lyudmila Georgievna, teacher of Medvezhyegorsk secondary school named after A. Fanyagina, noted the importance of these events and thanked the participants of the event.

Elena Evgenievna Pietilaynen, thanking the organizers of the event, left a review on her personal page in “VKontakte”:

Workshop of the word “- this is how the organizers outlined the topic of today’s creative meeting with schoolchildren of Medvezhyegorsk district. Since the meeting was held in an online format, students of the Northern College of Segezha also joined in.

I told the guys about the Sever magazine and my books. Everyone really liked the game “Tell me a word” that I proposed, during which I showed the difference between poetry and poetic text. After all, rhymed text can be written by everyone. And there are only a few poets. Judging by the attentive faces of the participants, this conversation turned out to be useful for the children and teachers.

I thank Yelena Yuryevna Guseva, director of the MRRC of PetrSU in Segezha, for organizing a series of creative meetings in the regions of Karelia, as well as all the participants! I hope that the guys will read my new stories for teenagers in the spring issue of the magazine “Sever”, as well as stories from the book “Tom is lucky, who is lucky himself.”